After a week of torrid voting and much passionate support, along with a lot of gut-wrenching consideration and jostling during the judging round, I am proud to announce your Top 40 Innovation Bloggers of 2022:

Our lists from the ten previous years have been tremendously popular, including: 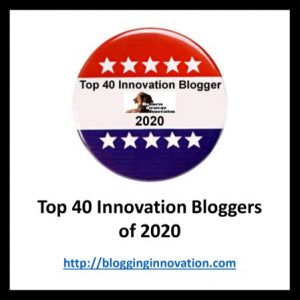 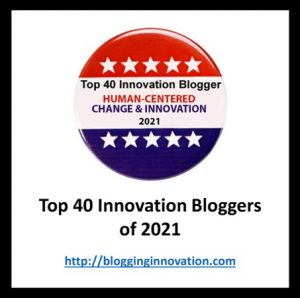 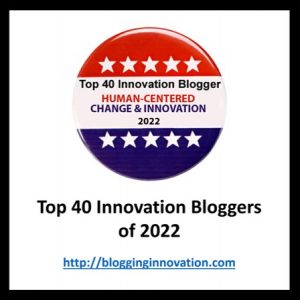 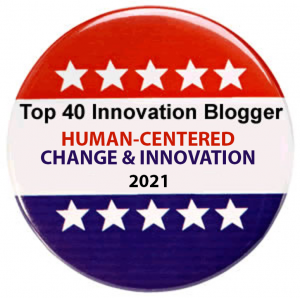 After a week of torrid voting and much passionate support, along with a lot of gut-wrenching consideration and jostling during the judging round, I am proud to announce your Top 40 Innovation Bloggers of 2021:

Our lists from the ten previous years have been tremendously popular, including:

After a week of torrid voting and much passionate support, along with a lot of gut-wrenching consideration and jostling during the judging round, I am proud to announce your Top 40 Innovation Bloggers of 2020:

My lists from the eight previous years have been tremendously popular:

We are in the final day of the CrowdSpring $500 design contest for designing the Nine Innovation Roles Card Deck. Once I pick a winner then I will need to pick a printer for the large format cards.

There are some very interesting and widely diverse designs to choose from for the Nine Innovation Roles Card Deck and I’d love to hear your vote on which winner I should choose in the comments below by adding a comment that says “Design One” or “Design Seven” or “Design Nine”, etc.

Here are the designs so far: 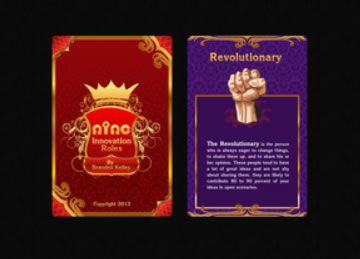 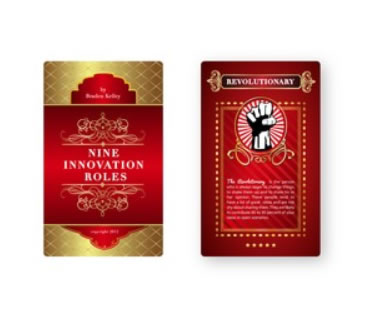 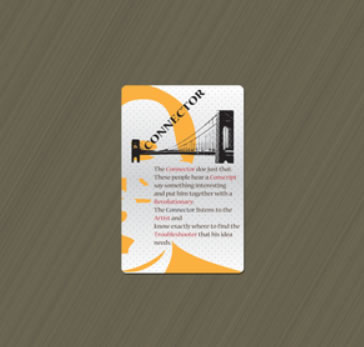 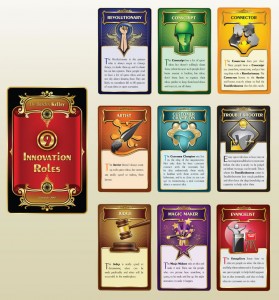 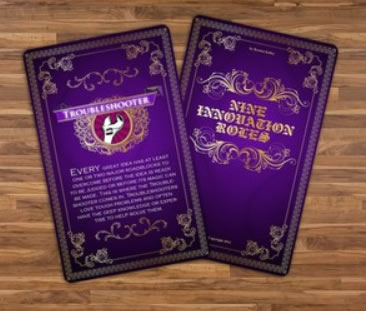 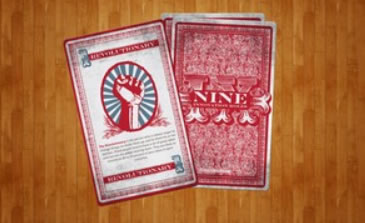 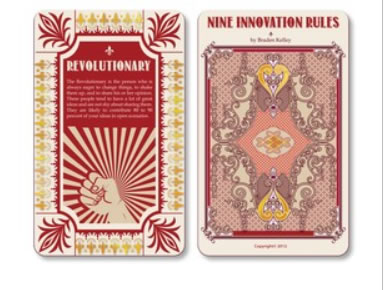 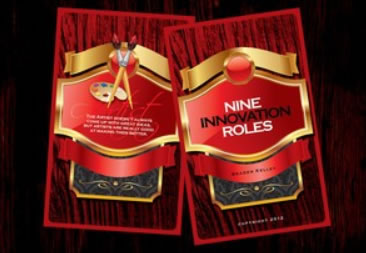 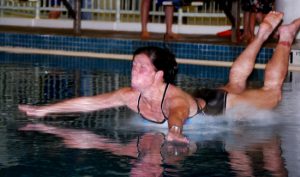 Despite the fact that Twitter has been around since 2006 and Facebook has been around since 2004, social media is still the bright shiny object in the room (it’s still the current marketing fad). People still think they are being innovative if they use it, and unfortunately many people still approach it as something separate and scary instead of treating it as just one tool in the toolbox of anyone working in marketing or innovation. Yes, I linked social media to innovation in the last sentence and that’s because in the same way that social media is a tool that all marketers must learn how to use as part of an integrated marketing campaign, innovation managers must also learn how to use social media properly as part of their innovation efforts.

So let’s get to our latest case study of how not to do social media by taking a look at a poorly run Facebook contest.

Back in July I wrote an article about the effect of social media on contests called – Does Social Media Corrupt Contests?

This article was written from an outsider’s perspective looking in. Well, in December I decided to dive into the Facebook contesting world and enter a contest for an energy-efficient big screen television hosted by the NEEA in hopes of winning a 55″ Samsung LED TV. Here is a quote from their Energy Efficient Electronics micro-site about what they do:

The Northwest Energy Efficiency Alliance (NEEA) is a private non-profit organization funded by Northwest utilities, the Energy Trust of Oregon and the Bonneville Power Administration. NEEA works in collaboration with its stakeholders and strategic market partners to accelerate the sustained market adoption of energy-efficient products, technologies and practices. NEEA’s market transformation efforts address energy efficiency in homes, businesses and industry. Its mission is to mobilize the Northwest to become increasingly energy efficient for a sustainable future.

My local utility, Puget Sound Energy, is a member of this organization.

Now let’s get to why my experience with this contest makes this an example of how not to do social media.

Background: The contest organizers – MartketShift Strategies (on behalf of NEEA) – operated the contest on Facebook. It was only open to people living in a handful of states and involved submitting captions for up to five photos provided by the contest organizers for public voting and judging of the finalists. Five televisions were up for grabs as prizes. There were two example captioned pictures – one using humor, and one focused on energy-efficiency. I decided to focus on humor. The rules stated that the five entries for each picture receiving the most votes would then be considered the finalists and would be judged, and that nobody could win more than one prize.

Here is a quick chronology of my experience highlighting some of the strategic failure points:

So what can we learn?

The most important thing to learn from this example of how not to do social media is that when utilizing social media as a tool to help you achieve your innovation or marketing campaign goals, you must keep those goals front and center in everything you do and ask if each campaign component supports your goals and your strategy. This is also a great example of how lots of people will tell you they are social media experts, and not really know the first thing about how to utilize the tools properly to support innovation or marketing campaign goals.

You can also see from this example that contests can be a hornets nest and that more often than not people try to game the system. This is why some people who provide idea management software solutions have chosen not to have badges and other similar elements (or to allow for those components to be turned off). This is also why if you choose to have any kind of voting component, particularly where any kind of prize is involved, that you set very clear guidelines for voting and do so in a way that maximizes the chance that the voting ends up being about the quality of the submission and not about the size of the entrants’ network.

‘Viral’ doesn’t come for free. Social media experts will try and convince you to use the tool to go ‘viral’ and get the crowd involved, but when you choose get the crowd involved and let them vote, you need to be ready and willing to let their votes count, otherwise you’ll destroy trust (and even brand equity). If you choose to engage the crowd in a public way you need to use their input, otherwise you’ll suffer very public consequences. If you’re looking for a higher level of quality in your submissions from a large number of people, consider using a more expert crowd instead (Innocentive, Hypios, Idea Connection, Nine Sigma, 99 Designs, TopCoder, etc.).

And last, but probably most important in my mind is that you need to walk the experience and look for potholes. The Marketshift Strategies folks definitely fell down on the job here. There were far too many barriers to participation in this contest, very little strategic integration, they should have anticipated the gaming of the system and written the rules better, and they should have actually followed their rules and the spirit of the contest a little better so that the people who didn’t game the contest and instead legitimately gathered votes were rewarded. The good thing is that without examples to dissect of how not to do social media, we wouldn’t all be able to learn how to use this powerful but dangerous tool in our innovator’s and marketer’s toolbox. 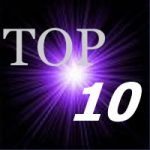 Do you have a favorite innovation video?

We asked you the global innovation community, to suggest videos for the Top 10 Innovation Videos of 2011.

Many people did, and they had the chance to win some of the $3,650 worth of prizes up for grabs.

Here are the Top 10 Innovation Videos of 2011 based on the submissions:

Here are two very similar visions of the future, the first is Microsoft’s vision for the year 2020:


The second is Corning’s vision of the future dominated by specialty glass:

What are your favorite innovation videos?
(make your suggestions in the comments)

If you’ve read all the way to the bottom, then you deserve a free sample chapter from my new book Stoking Your Innovation Bonfire. I hope you enjoy the sample chapter and consider purchasing the book as a way of supporting the future growth of this community.