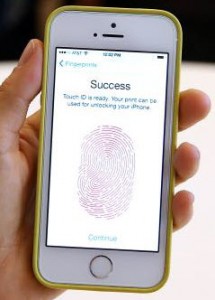 Last August I wrote about Apple’s pending acquisition of Authentec, a biometric authentication company (which has since closed). At the time Apple was in a real hurry to complete the acquisition and it made me wonder whether Authentec’s fingerprint authentication technology would make it into the home button of the iPhone 5 and eventually into the iPad and the iPad Mini. It didn’t.

But today, as part of the new iPhone 5S, Apple has finally integrated this biometric technology into their flagship mobile phone.

Why does this tiny little sensor represent such a potential sea change for the mobile industry?

Let’s look at all of the ways that this technology addition makes the iPhone more valuable than other phones.

By integrating the Authentec technology into the iPhone 5S home button, and eventually the iPad and the iPad Mini, Apple can not only create a handy way (no pun intended) to eliminate the need for remembering passwords, but also enable people to make their devices easily personalized for MULTIPLE users of the same device.

But if Apple takes advantage of all the purported abilities of the Authentec technology, the new iPhone 5S may also have the ability to recognize multiple fingers from a single individual, allowing for the home button to potentially achieve multiple functions – like the multiple button mouse.

In practical terms, this means for example that if your five-year-old gets a hold of your iPhone 5S, or you let them have it to keep them occupied in a restaurant, the iPhone 5S could potentially keep them from making phone calls, opening your work emails, etc. or just limit them just to accessing the Apps you grant them access to. But there is also no reason why apps like Netflix could also become personalized based on whose finger was used.

And maybe finally Apple will finally introduce some parental controls on the iPad. It’s maddening as a parent that my only choice on our iPad is to either give my daughter full access to Safari, or no access to Safari and that I have to go in and re-enable Safari when I want to use it. What decade is this? Hopefully iOS 7 will fix this.

For Apple, there are also legal and financial benefits from adding fingerprint authentication, as it will help to prevent (or at least reduce) unauthorized iTunes purchases made by account hackers or children playing with their parent’s iPhone 5S (or upcoming iPad 5). Fingerprint authentication in iPhone 5S and iPad 5 may also encourage people to begin utilizing Apple’s Passport.

It is embarrassing that the United States is so far behind the rest of the world when it comes to mCommerce. Mostly this has been because the financial services companies (Citibank, Bank of America, Chase, Wells Fargo, American Express, Mastercard, Visa, Verisign, etc.) and mobile phone carriers (Verizon, AT&T, Sprint, T-Mobile, etc.) have been fighting to control mCommerce in the United States to the detriment of United States citizens and consumers and mobile innovation. Shame on you!

The new iPhone 5S might help to reignite mobile innovation and mCommerce activity in the United Sates. And given that Apple makes most of their money selling hardware and are facing a market share challenge from Android and Windows 8 devices, it is in Apple’s best interest to open up a fingerprint sensor API in iOS 7 for third party app developers to utilize. This would maximize the potential differentiation and hardware sales, and the incremental device lock-in offered by this new capability.

But there are also increased revenue opportunities for Apple, as integrated fingerprint authentication is likely to lead to an increase in impulse iTunes and App Store purchases. Why will a fingerprint sensor likely lead to an increase in music and app purchases for Apple? Simple, it will make it easier and faster for people to buy things from iTunes or the App Store, and give consumers less time to change their mind after they get the urge to buy something.

One thing I didn’t see mentioned in Apple’s iPhone 5S announcement was the inclusion of any kind of Near Field Communication (NFC) capability in this latest flagship model. So v1.0 of Apple’s universal mCommerce authentication capabilities may only include authentication of eCommerce purchases made via mobile web sites or mobile apps. Without NFC I’m not sure exactly how authenticated purchases in the physical world would be made, short of a scanner reading a post-authentication-generated QR Code or something like that. Of course there is a way (or several) and mobile innovators surely will find them until NFC is incorporated into future iPhones and iPads.

Once NFC capabilities are added to the iPhone, then people like Square, but also traditional banks, and even Google could add iPhone 5S fingerprint authentication to apps for mCommerce for users to download and install on their phone. This represents a HUGE opportunity for Square and a challenge obviously for the established players. It will be interesting to see whether Apple will be the first to integrate fingerprint authentication together with NFC or whether Samsung or someone else will beat them to it, or even whether it might be able to be added via a 3rd party case or backing for the phone. What do you think?

The initial iPhone turned your finger into a more useful tool for the digital world. The new iPhone 5S turns your finger into a key, and how many locks it will help you open remains to be seen. Let’s hope that in the same way that the iPhone broke the stranglehold that the mobile carriers had on application innovation on the handset, the new iPhone 5S will create a new wave of mobile innovation in the mCommerce space.

Okay this time the pun is intended, and hopefully it will help some of you think of new possibilities for digit-driven computing.

Braden Kelley is a Design Thinking, Innovation and Transformation consultant, a popular innovation speaker, workshop leader, and creator of The Change Planning Toolkit™. He is the author of Stoking Your Innovation Bonfire from John Wiley & Sons and Charting Change from Palgrave Macmillan. Braden has been advising companies since 1996, while living and working in England, Germany, and the United States. Braden earned his MBA from top-rated London Business School. Follow him on Twitter and Linkedin.
View all posts by Braden Kelley →
This entry was posted in Apple, Design, Innovation, Strategy, Technology and tagged Biometrics, eCommerce, iphone, iPhone 5S, mCommerce, Security. Bookmark the permalink.

1 Response to Fingerprints of mCommerce Success on iPhone 5S?