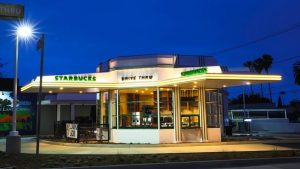 Starbucks is definitely regarded as an innovator in the mobile commerce and loyalty space.

Starbucks was one of the first retailers (2008) to successfully introduce a card-based loyalty program with broad adoption – the Starbucks card – which not only had loyalty benefits for customers but also could be used as a means of payment.

Building from this, Starbucks created a mobile app early in the smartphone era that mirrored many of the capabilities of the Starbucks card, allowing people to not only pay with their mobile phone (backed by a credit card), but to check their points and payment balances.

Starbucks then launched mobile order & pay in Portland near the end of 2014 before beginning to release it more broadly in 2015.

All of Starbucks’ loyalty and mobile technology inventions positioned the company quite well to survive the COVID-19 shutdowns around the world. 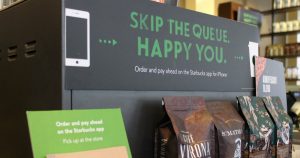 Personally I try to keep as many apps OFF my phone as possible. So, it wasn’t until the coronavirus restrictions that I finally caved in and downloaded the Starbucks app. The reason?

Given the pandemic, the last thing I wanted to do was stand around in an enclosed space with suspect ventilation waiting for my Starbucks beverage any longer than I had do. So, I downloaded the app and began ordering my drink from the car and waiting 4-5 minutes (or longer if they looked busy) before going inside to get my drink.

What I found annoying though was that the app gave an estimate that often was in the 15-23 minute range, despite the fact that it rarely took more than five minutes, and there was no notification when my drink was ready.

I started designing a better approach in my mind, and was about to suggest it to Starbucks when I happened upon what is likely a pilot in one of my local Starbucks. It looks like this: 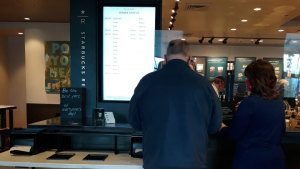 At this particular pilot Starbucks they have this flat screen that shows the people who have mobile orders placed (in alphabetical order) and then the Starbucks employee at the end of the line has a tablet they manage.

When an order is complete, the Starbucks employee updates the order status to ‘READY’ on the tablet, the image on the board changes to show a READY indicator, and a text message is sent to the person’s phone.

When the customer picks up their order, then the Starbucks employee marks it ‘PICKED UP’ on the tablet so that the person’s name is removed from the board.

This is very close to the idea that I was going to propose, but with one big exception.

My idea was to suggest printing out an enhanced bar code that could be scanned at the end of the line by the barista to trigger the text message – instead of using a tablet and a screen. This could have been a much simpler and cheaper approach both in terms of technology and labor.

Either way, there is no doubt that Starbucks continues to experiment and push for improvements in the last minute of the mobile ordering journey to create a great experience. This enables them to keep their employees and customers healthy and safe, and keep Starbucks ahead of their competition. 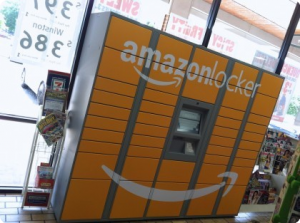 I came across a Wall Street Journal article recently that caught my eye, an article about Amazon Lockers. The concept is pretty simple. Amazon offers customers in select locations the option of having their package delivered to an Amazon Locker instead of to their street address. When the package arrives they receive an email letting them know where to pick it up along with the code to unlock it, and because most of the lockers are being placed in locations like convenience stores, often the customer can pick up their package 24 hours a day.

This is a great potential innovation for the segment of their customer base that has trouble receiving their packages – either because they live in an apartment or condo that is difficult to deliver to, aren’t home to sign, or because they are worried that their package might be stolen.

But the motive for the experiment is not purely an altruistic customer service one, companies like Amazon pay up to 20% more to have packages delivered to a residence. So, delivering a package to a locker helps Amazon save money too – helping to offset the costs of installing and maintaining the lockers. And as a bonus they serve as OOH (Out Of Home) advertisements in a context where people’s minds are already open to buying things.

So, what did the Wall Street Journal miss?

The Wall Street Journal missed the most important part of this whole idea, and one of the potentially most innovative parts of it. If you’re still missing the hidden golden nugget, one more hint before the reveal – think Amazon Web Services (AWS) including services like EC2 (Elastic Computing Cloud) and S3 (Simple Storage Solution). Now you should see that the real innovation nugget here is that what may look at the outset as a service innovation, is actually a platform innovation.

The same problem that has led Amazon to create the potential innovation that is Amazon Lockers, is a problem for all other online retailers. So, Amazon and their customers definitely benefit from the lockers, but they likely can also be leveraged by any retailer that sells their goods on Amazon. AND, in the future there is no reason that in much the same way that Amazon productized S3 and EC2, Amazon could also productize Amazon Lockers and sell it as a service that any other company can purchase and use. 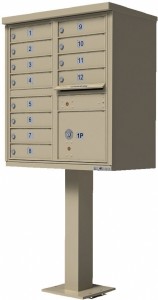 So who should have come up with this potential innovation?

FedEx, DHL, UPS, and the US Postal Service all missed this as a potential innovation that any of them should have actually developed. The inspiration for this potential innovation was sitting in full view all along. The US Postal Service installed multiple mailbox solutions in many subdivisions long ago to increase efficiency, and make it so that anyone receiving a package receives a key in their mailbox that opens a larger box in the same unit for package retrieval.

Are Amazon Lockers a good idea? A potential innovation? Yes, I think so. Whether they make the transition from interesting experiment or invention to innovation (through adoption) we will wait and see. But the fact that Amazon is expanding their test is a good sign that the transition from invention to innovation will be made. To close, I would just like to say that Amazon has some other possibilities they could (and likely will) explore, including: