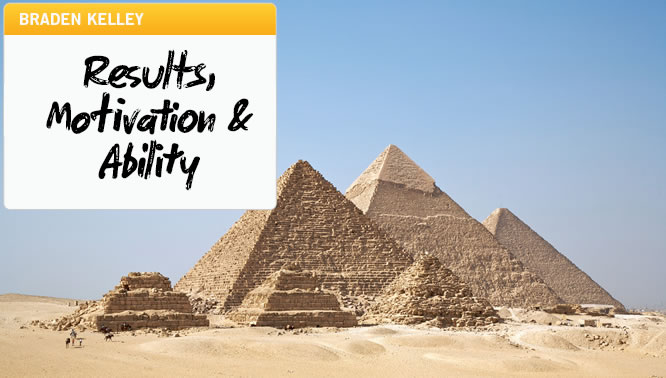 When engaging in a change effort it is important to focus not on outputs but on outcomes. The difference is sometimes subtle for people, but the biggest difference is that outputs are usually activity-based where outcomes are behavior-based.

There are several good behavior modification frameworks out there including the Six Boxes framework from Carl Binder, the Six Sources of Influence framework from VitalSmarts, and the Results Pyramid® from Partners in Leadership that start with the desired performance changes, results or outcome shifts and work backwards. 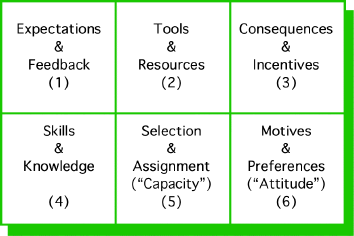 Potential Benefits of Using the Six Sources of Influence

Taken together they form the Six Sources of Influence (see the Motivation Ability Worksheet in Figure 1) and can be used to change behavior one individual at a time. And it is from these changes in behavior that the transitions towards the new way of doing things begin to happen. 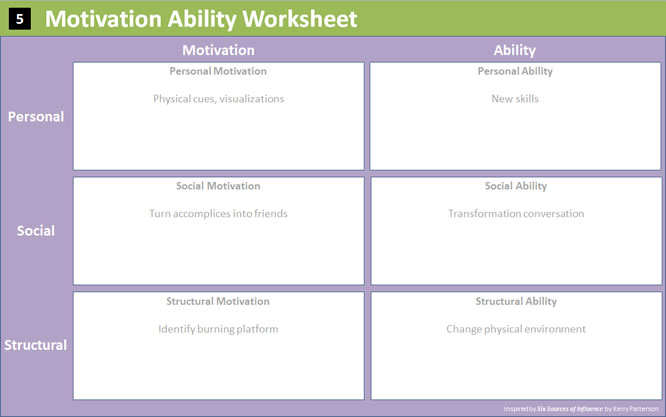 To utilize personal ability to influence the change will require teaching people the new skills to be successful at the new way of doing things. Consider breaking up the learning into short intervals where you can give people immediate feedback and prepare for people to have regressions back to the status quo. Work to identify those moments where people will be most tempted to regress to the status quo and create strategies that reinforce the new way of doing things.

To influence the change through personal motivation will require visualizing the change for people and utilizing physical and other cues (including vivid storytelling) to help reinforce that the change is desirable. Help people see, feel and believe in the new way of doing things (the desired state).

Finally, utilizing structural motivation will require selling the problem in a way that people are influenced to abandon the status quo (visualize it, prototype it, etc.) and structural ability can be used to motivate people by changing the physical environment to reinforce the change. Instead of using a stick to motivate people to change, consider using carrots and the threat of losing carrots. It’s a slight twist away from using a stick, but it’s a powerful one. Finally, reward small wins and use incentives (carrots) in combination and in moderation.

Devotees of the Six Sources of Influence may find the free Motivation Ability Worksheet useful.

The Results Pyramid® framework from Tom Smith and Roger Connors’ book titled Change the Culture, Change the Game focuses on the importance of building a culture of accountability. Leaders can accelerate the change and results that they seek by working with the bottom half of the pyramid (“beliefs” and “experiences”). The Results Pyramid® has four main components that I would love to show below in Figure 2 but can’t:

Figure 2 would have gone here

I was trying to help bring additional readers to the authors via the Results Pyramid® Worksheet, but it didn’t quite work out, so you’ll have to do without the visuals and imagine how the tool from Change the Culture, Change the Game could be used to:

In most cases you will find that your current set of experiences, beliefs, actions, and results have achieved a sort of equilibrium or alignment and that one of the keys to achieving successful change is to move from your current state of equilibrium or alignment to a new set of experiences, beliefs, and actions that create a new state of equilibrium centered around your new results. By identifying where you want to move the top of the pyramid, your can start moving the base of the pyramid followed sequentially be the layers above it, and in doing so, prevent the pyramid from toppling over.

The Results Pyramid® is based on the idea that too many organizations focus on the results they want to achieve in the shift from the current state to the desired state and that just by communicating the desired results that the organization will see these new results manifest. But, the reality that the Results Pyramid® captures is that in order to achieve a shift from the current state to the desired state, and to achieve a new set of results, you must do more than define the new results you want to achieve. And you must provide a new set of experiences, beliefs, and actions that will help you achieve those results. The other key component of the Results Pyramid® theory is that too often companies demand new actions to get new results, but the truth is that these four things (results, actions, beliefs, and experiences) are organized like a pyramid and you can’t just move the top of the pyramid without also moving the supporting layers as well.

Meaning, that to create a shift in results (or outcomes), you must create a new set of experiences that lead to a new set of beliefs that lead to a new set of actions that result in the new results that you are hoping for as a result of your change effort. And of course by planning out consciously the shift in results that you’re trying to achieve, you can work as a change planning team to identify the new experiences, beliefs, and actions that you need to create in order to achieve the new results

I find this a useful tool to consider using as you analyze the desired behavior changes and new outcomes you are seeking to achieve with your change effort as you go through your change planning meetings or off-site.

In this article we looked at the role of changing behaviors in achieving changed outcomes, and how we might use a couple personal behavior modification frameworks, the Six Sources of Influence and the Results Pyramid® to help us organize our conscious attempts to modify the behavior of individuals as part of our attempts to achieve our desired group behavior change and to ultimately to achieve the intended successful outcomes of our change effort.

So, check out the work of Carl Binder and grab yourself copies of Change the Culture, Change the Game and Change Anything and get started!

Get our Human-Centered Change & Innovation Weekly newsletter in your inbox

1 thought on “The Pyramid of Results, Motivation and Ability”