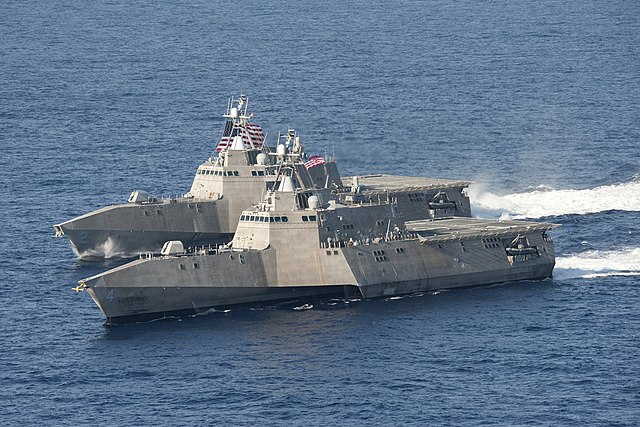 I wanted to call this article “Corruption versus Innovation” but I sailed back from the precipice to a more forgiving title to give the government and military contractors the benefit of the doubt that the Littoral Combat Ship (LCS) program – aka Little Crappy Ships – was not corporate welfare but merely a poorly executed military contract.

Back in 2004 the Bush administration decided it wanted to increase military spending.

One of the ways they decided to do this was to initiate a new shipbuilding program that benefited Lockheed Martin and General Dynamics. The initial phase of the project called for two ships of each design to be built at an estimated cost of $220 million each. The initial phase of this suspect shipbuilding program went so poorly that congress canceled the second ship each company was scheduled to build and re-opened bidding.

The government pushed for fixed price contracting, and despite agreeing to a fixed price of $432-437 million each, the first ship set sail at a price of $637 million and the second at a whopping $704 million. This for a ship that was initially envisioned to only need a crew of forty sailors (eight officers and 32 enlisted) to operate. This was later changed to a crew of 73 sailors and 20 airmen to operate helicopters, UAV’s or other special equipment.

After beginning the LCS program in 2004, it wasn’t until 2013 that the initial LCS achieved its first deployment – to Singapore. That’s nine years from initiation to product launch. Think about how much has changed in the last nine years – we’ll come back to this point later.

The continuing poor performance of both the program (never-ending cost overruns), and the ship itself, forced the US Navy to reduce its orders from 55 of the ships to 32. Despite this reduction in the number of ships, the Navy chose to still take delivery of all 120 of the helicopters designed to pair with the ships, deeming it more expensive to cancel the contract for the excess helicopters than to go ahead and take delivery.

You can probably see now why I was going to call this article “Corruption versus Innovation” as the billions of dollars siphoned from the taxpayers to the military contractors and their shareholders pile up.

What’s worse, not only have the ships proven to be THREE TIMES more expensive to acquire than advertised, but they break down all the time and cost nearly as much to operate annually as an Arleigh-Burke Destroyer AND they have still yet to deploy their mine countermeasure and anti-submarine warfare capabilities.

The situation is so bad that the Navy is abandoning the program and looking to replace its little crappy ships (LCS) with a new Frigate program – the FFG (X) to be constructed by an Italian shipbuilding firm.

So, what went wrong?

Through the eyes of both a U.S. Navy Veteran, and as an innovation professional, here are my thoughts about how the U.S. Government can require its contractors to leverage more innovation best practices in their provision of services on behalf of the American people. Here are five places to start:

1. Pick the Right Time Horizon for Your Design Challenge

One of the biggest mistakes that organizations make is not consider how long it takes to develop, launch and market a new product or service without considering how an identified customer insight might change over that timeframe. For example, if it takes you two years to launch a new product and you’re developing that product based on a customer insight identified today, there is a chance that two years from now the customer may no longer value the key elements of the solution you’re designing. So, you must make sure that you’re designing against a customer insight that will still be relevant at the end of your product development and launch timeline.

For more, see my article Are You Innovating for the Past or the Future?

2. Make Sure You’re Solving a Problem Worth Solving

It is really easy to latch on to a single problem and decide to solve it. But is it the right problem to solve?

Smart organizations don’t jump to problem solving too soon, but instead start with problem finding in a divergent manner before converging via problem prioritization, then diverge again in a problem deep dive and finally converge into a problem summary and a research brief focused on a carefully chosen problem worth solving. 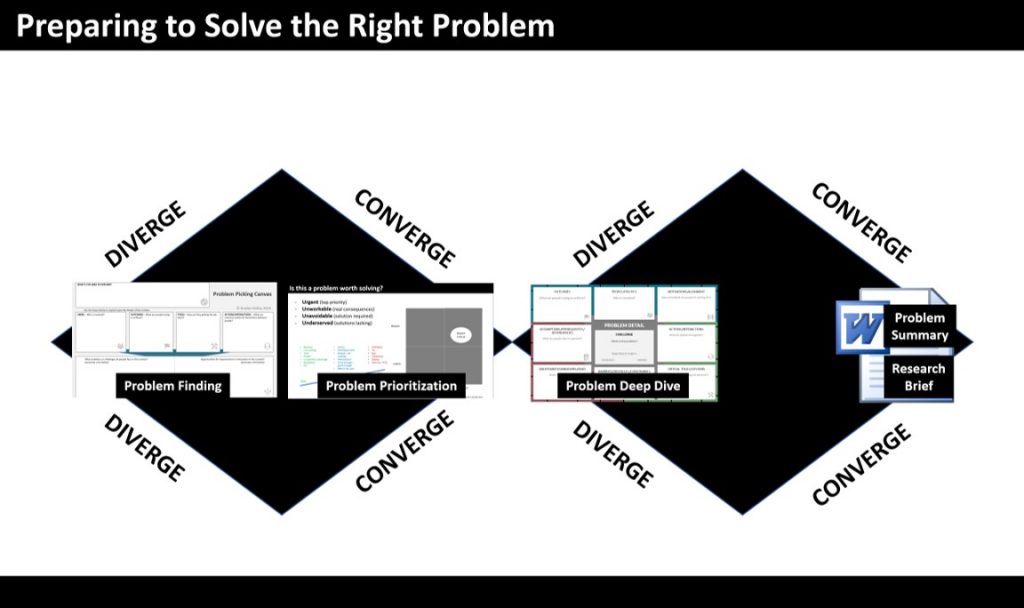 For more, see my article Picking a Problem Worth Solving From a Sea of Problems

No idea is perfect, and so when you can identify the potential fatal flaws or the high hurdles that have to be overcome, you can challenge them, you can solve for them, you can unleash the passion of your team on trying to find a way around them.

The fatal flaws are always there, and the wise innovator doesn’t ignore them or assume that they will overcome them at some point in the future, but instead invests energy upfront into both trying to identify the fatal flaws of their idea and into identifying whether they can isolate the solutions before moving the idea forward.

For more, see my article Innovation and Entrepreneurship Fatal Flaws

4. Create an Experimentation Strategy and a Plan for Learning Fast

When it comes to innovation, it is not as important whether you fail fast or fail slow or whether you fail at all, but how fast you learn. And make no mistake, you don’t have to fail to innovate (although there are always some obstacles along the way). With the right approach to innovation you can learn quickly from failures AND successes.

The key is to pursue your innovation efforts as a discrete set of experiments designed to learn certain things and instrumenting each project phase in such a way that the desired learning is achieved.

The central question should always be:

“What do we hope to learn from this effort?” 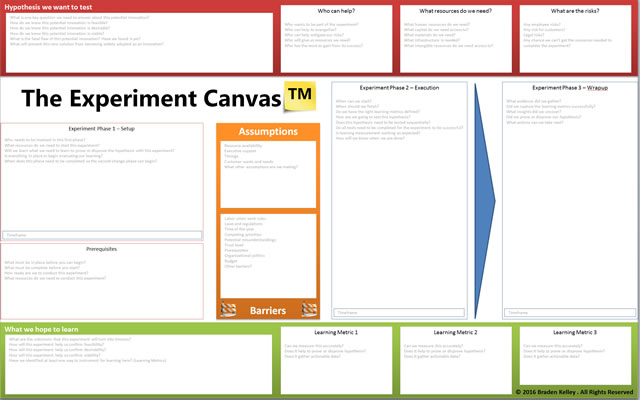 My Experiment Canvas is a great free tool you can download from this web site to help you design and execute a series of carefully selected experiments to help you get the right learning and to help identify early on whether or not you can realistically solve for the potential fatal flaws – as early as possible – while investments are low.

For more, see my article Don’t Fail Fast – Learn Fast and download your free Experiment Canvas poster to print or to use as a background to lock down and put virtual sticky notes on top of in online whiteboarding tools like Miro, Mural, LucidSpark or Microsoft Whiteboard.

5. Design for Modularity to Reduce Obsolescence

The LCS was promised to be a modular warship capable of performing multiple missions, but the contractors have failed to deliver on this promise.

It takes a really long time to put a new ship design to sea and into service. So, if you get it wrong, like with the LCS program, it will be many more years before you can replace a faulty design with a new design.

We rarely successfully predict the future, so it is important to design in the capability to adapt solutions as they are developed to match emerging realities. Otherwise, you can end up designing a solution for a problem that goes away.

The automobile industry has gotten really good at designing in this way. Different trim levels have different stereo options, for example, or a dealer can install a spoiler or a luggage rack pretty easily if a customer desires it.

Designing with modularity and upgradeability in mind to change out key components to different mission needs that may emerge over time or new technologies that may create new or enhanced capabilities, is an incredibly powerful way to extend the usefulness and lifespan of each new maritime defense hull.

The U.S. Navy is in a quandary about what to do with the Littoral Combat Ships (LCS) it already has.

So much so that it has reached out to fleet commanders to inquire what missions the ships should be deployed against – according to Naval Surface Forces Vice Adm. Roy Kitchener.

The Navy should consider opening up their queries for help even wider, perhaps to the global innovation community.

But, with that said, as a U.S. Navy veteran I think the perception of the success or failure of this program would be seen much differently if they had successfully deployed the Anti-Mine Countermeasure and Anti-Submarine Warfare capabilities BEFORE the Surface Warfare capabilities.

Frigates and Destroyers are much more capable surface warfare platforms, and in hindsight the billions of dollars wasted on this program could have been much better spent for the benefit of the American people.

So, I hope that military contractors and the U.S. Government will improve their ability to deliver increased value at a decreased price as they pursue future shipbuilding programs and leverage some of the innovation best practices above.

Grabbing a copy of Stoking Your Innovation Bonfire would also be a great place to start.

3 thoughts on “Bureaucracy and Politics versus Innovation”