Why the Maker Movement Matters 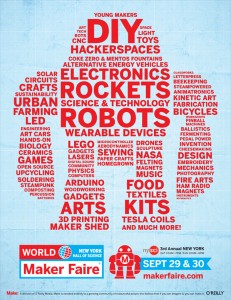 The Maker movement is steadily gaining steam and some cities are looking to help it grow and thrive, seeing it as an opportunity to inspire artists and entrepreneurs. One such city is Edmonton, which lies in the Alberta province of Canada, and its program in their public library system to provide maker spaces staffed with library employees and equipped with 3D printers, computers with Apple’s Garage Band and Adobe’s Creative Suite, and more.

Here is a video of Peter Schoenberg of the Edmonton Public Library introducing the EPL MakerSpace:

If you’re not familiar with the Maker movement, then check out these pages:

Or check out these quotes from Time magazine’s article titled “Why the Maker Movement is Important to America’s Future“:

“According to Atmel, a major backer of the Maker movement, there are approximately 135 million U.S. adults who are makers, and the overall market for 3D printing products and various maker services hit $2.2 billion in 2012. That number is expected to reach $6 billion by 2017 and $8.41 billion by 2020. According to USA Today, makers fuel business with some $29 billion poured into the world economy each year.”

“As someone who has seen firsthand what can happen if the right tools, inspiration and opportunity are available to people, I see the Maker Movement and these types of Maker Faires as being important for fostering innovation. The result is that more and more people create products instead of only consuming them, and it’s my view that moving people from being only consumers to creators is critical to America’s future. At the very least, some of these folks will discover life long hobbies, but many of them could eventually use their tools and creativity to start businesses. And it would not surprise me if the next major inventor or tech leader was a product of the Maker Movement.”

So what do you think?

How much of a contribution to the future of innovation will the Maker Movement make?

How important is supporting the maker movement to the future of an economy?

Is this trend sustainable?

Braden Kelley is a Director of Design Thinking, Innovation and Transformation at Oracle, a popular innovation speaker, workshop leader, and creator of The Change Planning Toolkit™. He is the author of Stoking Your Innovation Bonfire from John Wiley & Sons and Charting Change from Palgrave Macmillan. Braden has been advising companies since 1996, while living and working in England, Germany, and the United States. Braden earned his MBA from top-rated London Business School. Follow him on Twitter and Linkedin.
View all posts by Braden Kelley →
This entry was posted in Design, education, Entrepreneurship, Government, Innovation and tagged 3d printing, Canada, economics, economies, Edmonton, libraries, makers. Bookmark the permalink.