I am proud to announce the winning design for the Nine Innovation Roles Interactive Card Deck.

It comes to you from a $500 design contest I ran on the popular crowdsource site – CrowdSpring. As I wrote previously I was unsure whether to use 99Designs or CrowdSpring and even went so far as to throw it out as a question to the audience here to see what the wisdom of the crowd said. In the end, CrowdSpring won the business over 99Designs because they took the time to interact with me on Twitter when I was busy also asking my 12,800+ Twitter followers the same question. 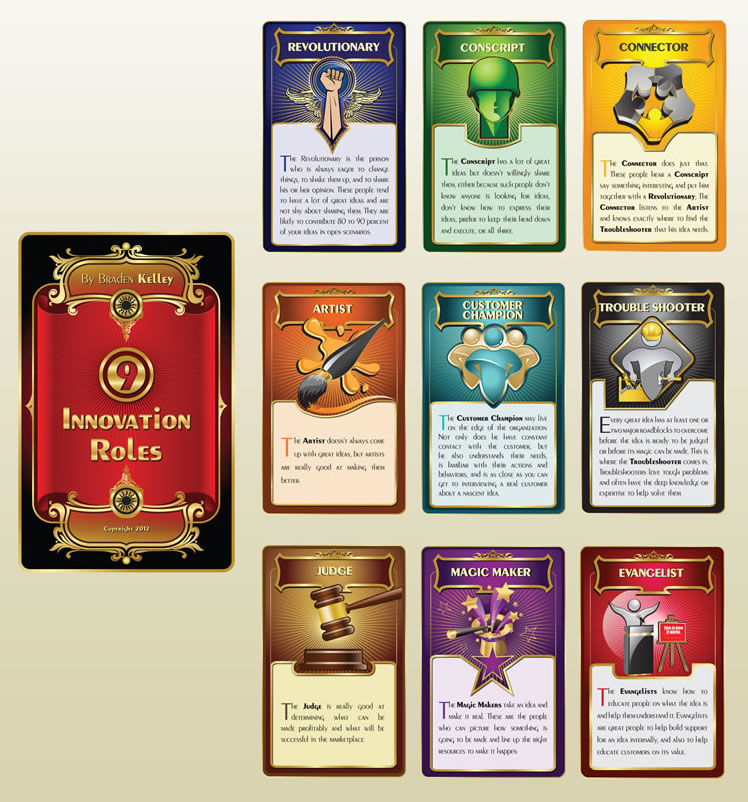 Now I will post the winning design on my IndieGoGo project page to build the funding momentum for the project there. Some of you may remember that I first tried to start a project on Kickstarter but was summarily rejected – I guess for not being cool enough or arty enough. No matter. I look forward to working with the folks at IndieGoGo instead.

If you’re not familiar with The Nine Innovation Roles, check out this presentation:

Braden Kelley is a Director of Design Thinking, Innovation and Transformation at Oracle, a popular innovation speaker, workshop leader, and creator of The Change Planning Toolkit™. He is the author of Stoking Your Innovation Bonfire from John Wiley & Sons and Charting Change from Palgrave Macmillan. Braden has been advising companies since 1996, while living and working in England, Germany, and the United States. Braden earned his MBA from top-rated London Business School. Follow him on Twitter and Linkedin.
View all posts by Braden Kelley →
This entry was posted in Design, Innovation and tagged Crowdspring, IndieGoGo, Kickstarter. Bookmark the permalink.