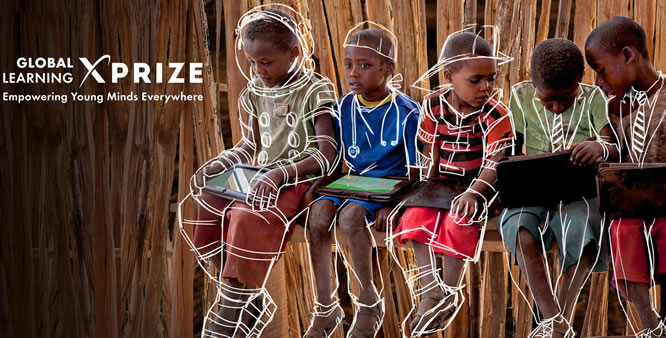 An estimated 250 million children around the world cannot read, write, or demonstrate basic arithmetic skills. Many of these children are in developing countries without regular access to quality schools or teachers. While programs exist to build schools and train teachers, traditional models of education are not able to scale fast enough to meet demand. We simply cannot build enough schools or train enough teachers to meet the need. We are at a pivotal moment where an innovative approach is necessary to eliminate existing barriers to learning, enabling the seeds of innovation to be imparted to every child, regardless of geographic location or economic status.

XPRIZE Chairman and CEO, Dr. Peter H. Diamandis announced the $15M Global Learning XPRIZE today to help solve these challenges. The Global Learning XPRIZE is a five-year competition challenging teams to develop an open source solution that can be iterated upon, scaled and deployed around the world, bringing quality learning experiences to children no matter where they live. Enabling children in developing countries to teach themselves basic reading, writing and arithmetic.

At the same time, XPRIZE will launch an online crowdfunding campaign to mobilize a global street team of supporters to get involved with the Global Learning XPRIZE. Every dollar pledged will go towards optimizing the success of the prize, specifically focusing on supporting team recruitment globally and expanding field testing.

The Global Learning XPRIZE will launch with a six-month team registration period followed by 18 months of solution development. A panel of third-party expert judges will then evaluate and select the top five teams to proceed in the competition, and award each of them a $1M award. Solutions will be tested in the field with thousands of children in the developing world, over an 18-month period. The $10M top prize will ultimately be awarded to the team that develops a technology solution demonstrating the greatest levels of proficiency gains in reading, writing and arithmetic.

The learning solutions developed by this prize will enable a child to learn autonomously. And, those created by the finalists will be open-sourced for all to access, iterate and share. This technology could be deployed around the world, bringing learning experiences to children otherwise thought unreachable, who do not have access to quality education, and supplementing the learning experiences of children who do.

The impact will be exponential. Children with basic literacy skills have the potential to lift themselves out of poverty. And that’s not all. By enabling a child to learn how to learn, that child has opportunity – to live a healthy and productive life, to provide for their family and their community, as well as to contribute toward a peaceful, prosperous and abundant world.

XPRIZE believes that innovation can come from anywhere and that many of the greatest minds remain untapped.

What might the future look like with hundreds of millions of additional young minds unleashed to tackle the world’s Grand Challenges?

I am very excited about this new effort, as I am a big believer that we should live in a world where the next Einstein could come from anywhere, but I have a few of concerns:

For more on my views on improving education (which doesn’t require education reform or new technology), please see my article Stop Praying for Education Reform.

For those of you who are going to enter a team, I look forward to seeing what you come up with and I hope that you’ll keep some of the above in mind! 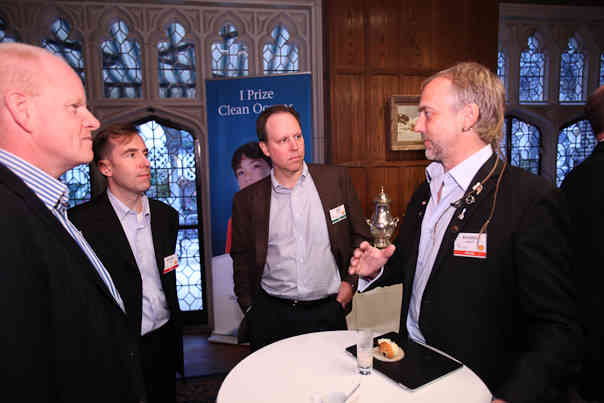 I had the opportunity to meet several amazing explorers of land, sea, and space at the announcement of Shell’s sponsorship of the XPrize Foundation’s exploration prize group recently. The explorers they had present at the event included: 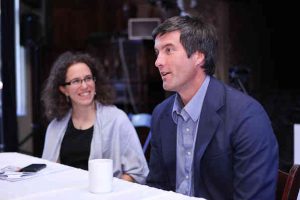 I had the opportunity to hear Mark Synnott speak of how despite the enormous risk he undertakes in his climbing explorations, that the thing that scares him most is the possibility of slipping on easy ground. When he is attempting a difficult portion of a climb, he is always thinking about what his exposure to risk is, but on easy portion it is easy to forget to take proper precautions. Yet, when it comes to his kids Mark thinks he is probably one of the world’s most over-protective parents, but at the same time he wants to inspire his kids to be curious about the world.

Gerald Schotman of Shell hopes that the challenges they pursue with the XPRIZE Foundation will stimulate curiosity in children and adults around the world, and that it will help to encourage people (even their own employees) to embrace their explorer mindset.

My conversation with Mark and Gerald led me to think to myself:

I wonder what the role of curiosity is in innovation?

While I was pondering this question, my conversations continued and I probed further to examine the link between curiosity and innovation.

The Role of Curiosity in Innovation

Peter Diamandis of the XPRIZE Foundation talked about how for him the link between curiosity and innovation is the following:

“What should be possible that doesn’t yet exist?”

This is a great question to inspire curiosity and stimulate thinking that could lead to innovation. 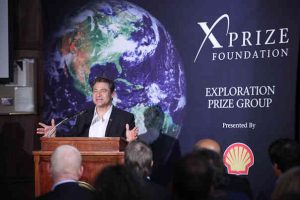 Peter Diamandis talked about how we need to ask where a breakthrough should be possible and focus on structuring an innovation challenge to help harness people’s curiosity to push past current obstacles in thinking or execution. Peter has learned first-hand that small teams are amazingly powerful, and talked about how big organizations focus on reducing risk by throwing lots of money and resources at a challenge. On the flip side though, when you put a box around a challenge with a small budget and a small team, then that small team of people will know the traditional approach will fail – and try a different approach.

Challenges uncovered during exploration and execution often prove more challenging to solve than anticipated. Chris Welsh of Virgin Oceanic talked about how both he and James Cameron thought they were working on 18 month projects that for both have turned into 4 to 5 year journeys. For those of you not familiar with Virgin Oceanic’s mission, they are hoping to send one person to the deepest point in each of the world’s five oceans.

Bringing Curiousity Out of Its Shell

When I spoke to Gerald Schotman of Shell about curiosity he spoke about trying to recruit curious people into Shell, leading by example, and attempting to trigger curiosity by setting scary targets:

“If your dreams don’t scare you, you’re not being ambitious enough”

Exploration of the Exploitation 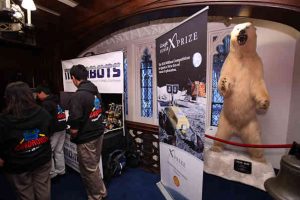 In speaking with David Gallo about exploration of the seas, he spoke about how when we oversell a danger like climate change in the media, it is damaging – there is no plastic island the size of Texas in the middle of the ocean. But there is a chemistry change in the ocean, a soup, a film leads to us eating our own garbage as plastic, flame retardants, and other runoff embed themselves in the tissue of the fish we eat. We have changed the temperature and the chemistry of the oceans, and anyone who has an aquarium knows that’s a bad idea.

Xprize Polar BearWe must reduce the runoff into the oceans and stop over-fishing if they are going to be able to help sustain us for the long-term. In the meantime, we must explore more of the oceans that cover 70% of the earth. To date, we have only mapped 5% of the ocean floor, meaning there are huge areas of the ocean that we’ve never been to.

Chris Welsh talked about how at the bottom of the ocean it might be possible to find a liquid CO2 reservoir deep down, and that at its edges we might be able to observe chemosynthesis taking place instead of photosynthesis. There were people talking about underwater rivers, waterfalls, and lakes – all of it a bit challenging for me to understand – but exciting to see where continued exploration of our undersea world might lead.

Expected and Unexpected Outcomes from Exploration

One of the outcomes that we would expect from exploration is the commercialization of some of what we find. In Richard Garriott’s case he has a business selling novel proteins from the ocean floor and crystallized proteins from space.

At the same time, Chris Welsh talked about the recovery of rock life from 30 meters within the rock at the bottom of the ocean and how this microbial was 140 million years old and had been consuming the sulphur out of the rock. Then Russ Conser of Shell added that most oil comes not from plants and dinosaurs but from microbial life.

Meanwhile, one of Mark Synnott’s stories was from a National Geographic climb of a cliff in the Amazon rainforest where they discovered nine new species living on the cliff face – including a giant green earthworm. I’m not sure anyone expected that. And that is the thing about exploration. If you don’t explore, you don’t know what you’ll miss finding or what further discoveries a single exploration might lead to because of the curiosity it stimulates.

After spending the day amazed at some of the things these people are exploring and discovering, I think I crystallized my thoughts on the link between curiosity and innovation that I wondered about at the beginning of this article, and here it is:

So, if we want to increase the volume of innovation in our organizations and societies, we need to inspire and foster curiosity in our employees, citizens, and children. But more than that, we need to encourage people to explore in the areas they are curious about. From that exploration, discoveries will take place that could change the world.

This leaves us with three final questions: 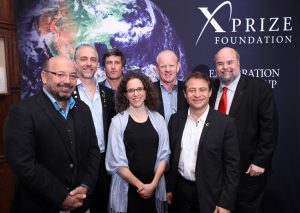