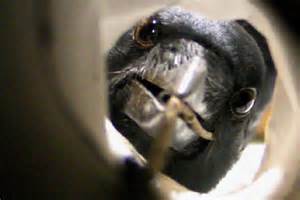 Crows are everywhere. There is no denying it. What is fascinating is that unlike many animal species, crows live in harmony with humans (along with rats and cockroaches), and in fact choose to live with humans instead of away from them, continuing to evolve in order to thrive in areas where humans dominate the landscape.

I came across an interesting Ted video with hacker and writer Joshua Klein about his fascination with crows. It is about ten minutes long and documents examples of a variety of academic research and observations highlighting the intelligence of crows, including his own experiments with a crow vending machine.

What’s also evident in the video and interesting is how much we underestimate crows, which may go back to the popular saying ‘bird brain’. Joshua Klein highlights in the video that far from being ‘bird brains’ crows have the same ratio of brain power as a chimpanzee and possess complex communications, socialization, and memory capacity.

If you watch the video above you’ll see that crows are creative problem solvers (creativity having also been proven as a trait of dolphins) and much more persistent than a squirrel (and many humans for that matter).

So, what can we learn about innovation from the crows in the video (or in real life)?

Well, two things for sure:

Crows are inspired to use their creativity in the pursuit of food. Rewards are not a panacea for humans, but can be useful from time to time, when properly framed and reinforced with the right inspiration.

2. We must encourage people to be persistent.

If we let people be squirrels, people won’t push through the difficulties that wicked problems present, and won’t get to the other side where wicked solutions are achieved. Look at how the crows in the video were led step by step to overcome smaller challenges that accumulated into a complex solution that people wouldn’t normally think the crows would have been capable of.

These are the links between the crows and innovation that I identified from the video.

What did you see?

This article was originally featured on Linkedin 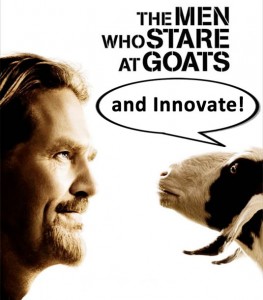 What makes you stop and stare?

I’ve written many times about the role of inspiration in innovation, and there are lots of sources of both inspiration and innovation. For me, inspiration is so important to innovation that I put inspiration at the center of my Eight I’s of Innovation framework (traducido al español por Vanessa Lopez-De la O). While inspiration is of course important, there are seven other I’s in the Eight I’s framework that help to transform inspiration into income. I came across a video, on Yahoo! Sports of all places, that inspired me. It shows goats engaging in a very unusual behavior with a metal ribbon.

The video of the goats’ behavior made me not just stare, but also made me think about several things, including:

What else can we learn from this video?

Well, in my previous post Key to Innovation Success Revealed! I shared that I see successful innovation as being composed of:

Some might disagree with me, but I believe animals can be inventive, and we can see in the video the goats collaborating. But are the goats being entrepreneurial here?

Are humans the only animals that innovate?

What can we learn from the behavior, physics, or architecture of other animals that might inspire us to achieve success with our current innovation challenge?