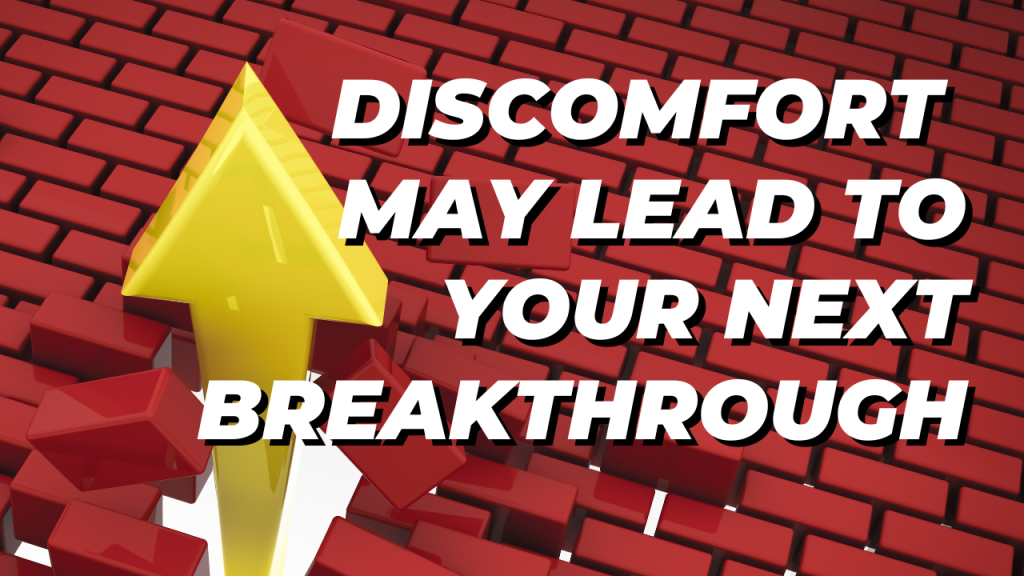 The disclaimer on investments is that “past performance is not an indicator of future results.” In other words, don’t get too comfortable with the past. All you have to do is look at the stock performance through last year (2021) compared to this year’s performance to know this is true.

Yet when it comes to people, the opposite is often true. Past performance is often an indicator of future results. Most people get comfortable and stay where they feel safe. But, what if you were willing to be uncomfortable? What if you were willing to go against the status quo, learn something new, regardless of difficulty, and take more risks? How would you feel living in a state of discomfort?

Sterling Hawkins, author of Hunting Discomfort: How to Get Breakthrough Results in Life and Business No Matter What, shares how successful people thrive on discomfort. These are the people whose past performance won’t always indicate what to expect in the future. They thrive on risk, stepping out of their comfort zones, and are fueled by something new and different.

In the book, Hawkins teaches his five-step process that produces results:

1. Expand Your Reality: Just because you were taught that something should be a certain way doesn’t mean it has to be that way. Some might call this “thinking outside the box.” It’s shattering paradigms and challenging the status quo.

This reminds me of the story that the late, great Zig Ziglar used to tell about a family dinner that included four generations. As the dinner was being prepared, a little girl asked her mom, “Why do you cut off the end of the roast before you cook it?” Mom said, “That’s the way your grandmother taught me to cook the roast.”

The little girl then went to her grandmother and asked, “Grandma, why do you cut the end of the roast off before you cook it?” Grandma said, “That’s the way your great-grandmother taught me to cook the roast.”

The little girl then went over to her great-grandmother and asked, “Great Grandma, why do you cut the end of the roast off before you cook it?” Great Grandma said, “A long time ago, the ovens weren’t as big as they are today. We had to cut the end off for the roast to fit into the oven.”

Just because we’ve always done something one way doesn’t mean we should keep doing it that way. Expanding your reality is just looking beyond the usual and ordinary.

2. Get a Tattoo: Hawkins believes you should commit so deeply to something that you’re willing to have it tattooed onto your body. You may disagree, but you do get the point. This is about commitment. The tattoo is a metaphor. You don’t really need to permanently put your feelings on your body, but consider this …

Scott Ginsberg is known as The Nametag Guy. While in college, he found that more people would talk to him if he wore a nametag. It made him approachable. He wrote a speech and several books about how to be more approachable. He committed to wearing a name tag every day. After five years, he made the ultimate commitment to his idea. He had the name tag tattooed onto his chest. That’s commitment!

3. Build a Street Gang: Surround yourself with people who will not only support you but also hold you accountable for your potential. According to Hawkins, having a trusted accountability partner can increase the likelihood of your success by up to 95%!

4. Flip It: The book covers a process for not just overcoming problems or obstacles, but instead using them to your advantage. To Flip It isn’t about seeing the reverse. It’s more about seeing the problem or challenge from a different perspective, starting with a complete understanding of the problem, obstacle, challenge or goal.

Hawkins quotes inventor Charles Kettering who once said, “A problem well stated is a problem half-solved.” Before you can solve a problem, you must first understand it. Clarity is paramount. You must be sure that the problem is not confused with the symptom. The problem becomes a challenge, and you must be clear about what impact solving that problem will mean to you or your organization. Most often, there is a larger purpose to the challenge. What’s the true end goal? For example, you may want to run a 10K race, but the larger vision is to be in good enough shape to run it.

5. Surrender: This isn’t about giving up. Instead, it’s about acceptance. Embrace inevitability and unpredictability. Be flexible and pivot when necessary. Sometimes you’ll find a breakthrough in the middle of the darkest problems. During the pandemic of the past two years, when faced with huge obstacles, some companies and brands not only survived but also found ways to thrive. The same is true for people.

We are in a world where change is happening at a faster pace than ever. We are faced with opportunities that are often disguised as problems and challenges. Hunting for the discomfort in your life and seizing it as the chance to have a breakthrough is what successful people do.