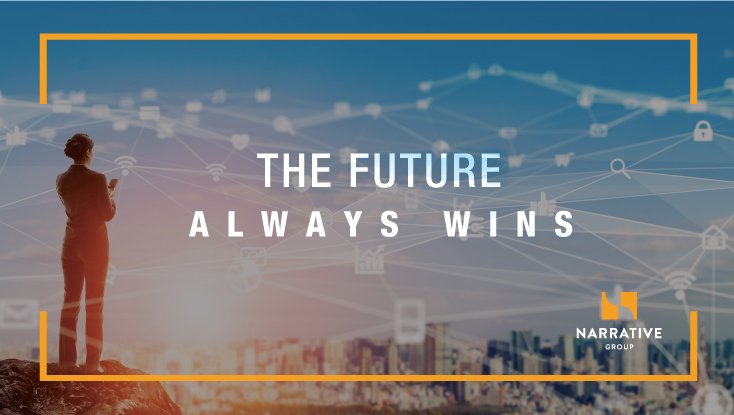 “The most damaging phrase in the language is, ‘We’ve always done it this way!”
~ Grace Murray Hopper

Nearly a century ago in 1923, General Motors made an evolutionary leap in car design with the chemical expertise of Dupont. Debuting the new Duco paint technology, they introduced consumers to a range of car colors, thus giving the Second Industrial Revolution more variety. This was antithetical to rival Henry Ford’s ‘keep it plain to make it rain’ approach. One car – one color was his contribution to humanity. But the robotic consistency that made Ford a legend also became his Achilles heel as glamor and luxury disrupted the auto business and he was dragged kicking and screaming into the future.

When people say ‘it’s lonely at the top’ – it’s not. It’s crowded with competition. In today’s Fourth Industrial Revolution – or Industry 4.0 – leaders that have the courage to change are able to do what some titans haven’t been able to do.

Technological leaps have now advanced to an accelerated rate unprecedented in human history. Change is no longer a left curve surprise, but rather a constant evolution that offers both potentially great reward – and great risk. If growth doesn’t drive change – danger will. Visionary leaders navigate today’s ‘wild west’ landscape with an intelligent team approach. One that re-aligns technology to serve business goals rather than other way around.

But this is not a solo mission. Evolution thrives in collaboration, whether it’s upending an industry or upleveling a medium sized firm into a scalable trajectory. Optimizing the tech-business relationship takes multiple points of expertise and objective study. Where technology currently serves – and where it’s poised to strike is a critical question at the heart of any digital transformation worth undertaking. This may not be obvious at first glance. A previously valuable ‘built to last’ feature may now be hindering ‘built to evolve’ capabilities.

That is one reason why C-Suite leaders often turn to digital transformation firms such as The Narrative Group to fix the gap between their current technological resources and their ambitions. Just as GM partnered with Dupont to dazzle consumers nearly a hundred years ago, corporations that wish to present their best offer to the world need a similar confluence of five positive elements:

And most importantly … The Willingness to Change Because the future always wins.

When I founded The Narrative Group, it was partly in response to this need for collaboration that I saw as critical to a corporation’s evolution. Going a step beyond ‘consulting’ to helping construct a corporation’s best future allows me to contribute to the safeguarding of that future for the many people that rely on a corporation’s healthy bottom line to build their own lives. Human potential is measured not only in outcome but also the way in which that outcome is achieved. Effective collaboration requires three key pillars that support an evolutionary leap:

This is part of a larger conversation that I enjoy having with clients and within my own team. I will elaborate on some of these points in future posts, but for now I hope I’ve sparked some reflection about the strength of character great leaders exhibit when they choose to master change rather than be blindsided by it.

If you’re a C-Suite leader that would like to discuss your corporation’s Industry 4.0 evolution and how to advance towards a best future outcome that aligns with your vision, reach out at:

Looking forward to continuing the conversation…