Every once in a while someone comes along and takes what most people believe is a mature category and finds a way to inject new life, new innovation into it.

What’s even more impressive in the case that I’m about to talk about is that a new entrant has found a way to innovate in a category where the dominant player is often held up by innovation consultants and innovation keynote speakers (like myself) as a company that has an innovative culture and working environment, plus an open innovation program worth looking at.

What established player am I speaking of?

And if you’re not aware of their open innovation program, it is called Lego Cuusoo.

So how could someone come in and realistically challenge Lego?

By coming in with a building toy approach that is both Lego compatible but while simultaneously introducing new design and building capabilities.

The main thing that this new competitor is bringing to bear to compete with the dominant Lego, is motion.

Think about what would happen if you smashed together the basic tenets of Lego with the basic tenets of Hasbro’s Transformers (more than meets the eye), and you’ll start to get an idea of what this new competitor is bringing to their crashing of the Lego party.

Who is this Lego competitor?

They are called Ionix Bricks. 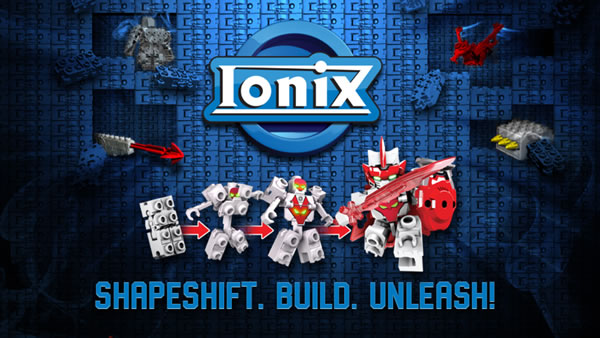 They launched into the marketplace with a Saturday morning cartoon called Tenkai Knights on the Cartoon network.

Here is a video review of some of the initial robot characters, showing how they transform and can be configured and played with:

Will they catch on and take some of the building toy market away from Lego?

Personally, I think that they have a chance of doing so, and if nothing else I think that Ionix Bricks and the Tenkai Knights are a good reminder that even in categories that people might think are pretty mature and the dominant player is unlikely to be disrupted, that isn’t necessarily the case.

And if you get bored with the pieces that come in any of the Tenkai Knights building sets?

Well, because they are compatible with Lego and other leading building sets, you can attach all kinds of crazy, random Lego pieces that you might already have from castle, space, or other kinds of sets.

Ionix Bricks are a good example of the “C” from SCAMPER – Combine – as they are exactly the kind of outcome you would expect if you combined Legos with Transformers. I wonder what kind of other crazy toys some young toy designer out there could come up with by combining Legos with something else.

What things about your product or service could you challenge? How could SCAMPER or other ideation tools help you?

Braden Kelley is a Director of Design Thinking, Innovation and Transformation at Oracle, a popular innovation speaker, workshop leader, and creator of The Change Planning Toolkit™. He is the author of Stoking Your Innovation Bonfire from John Wiley & Sons and Charting Change from Palgrave Macmillan. Braden has been advising companies since 1996, while living and working in England, Germany, and the United States. Braden earned his MBA from top-rated London Business School. Follow him on Twitter and Linkedin.
View all posts by Braden Kelley →
This entry was posted in Design, Entrepreneurship, Innovation, marketing, Open Innovation and tagged Cartoons, Children, Kids, Lego, Toys, Transformers. Bookmark the permalink.