Will Aereo strike the Death Knell of Cable Television? 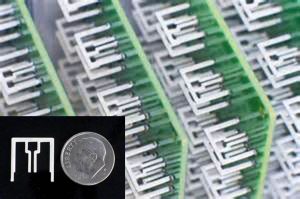 Somewhere across the vast reaches of social media (I can’t remember where) I came across a small but growing internet television service called Aereo that allows you to stream live television over the internet on any device or even to record up to two shows at once like you would with a DVR – for only about $80 per year. Imagine a roof antenna or rabbit ears on your TV that happened to be somewhere you never had to see them. Aereo makes that possible. Here’s how:

So small it fits on the tip of your finger. But it still gets awesome HD reception.

2. They’ve connect those antennas to the Internet

They designed a way to put tons of these antennas in data centers, along with massive amounts of storage and super-fast Internet connections.

3. They give you control of your own antenna

They’ve built a simple, elegant interface to let you control this antenna. With any device you want, over the internet. All without boxes, cables, or cords.

The company has been around for about one year now and is now expanding to 22 additional cities. Cable Television Distributors are of course fighting back against this potential disruption, but Aereo maintains that their solution is legal. The bigger questions though are:

Braden Kelley is a Director of Design Thinking, Innovation and Transformation at Oracle, a popular innovation speaker, workshop leader, and creator of The Change Planning Toolkit™. He is the author of Stoking Your Innovation Bonfire from John Wiley & Sons and Charting Change from Palgrave Macmillan. Braden has been advising companies since 1996, while living and working in England, Germany, and the United States. Braden earned his MBA from top-rated London Business School. Follow him on Twitter and Linkedin.
View all posts by Braden Kelley →
This entry was posted in Entrepreneurship, Innovation, Technology and tagged Antennas, Cable Television, Comcast, DVR, entertainment, Streaming Television, television, TV, Video Streaming. Bookmark the permalink.