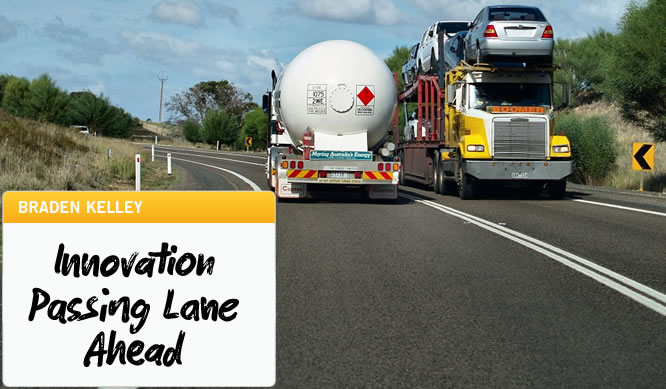 I noticed an interesting phenomenon the other day on a 200 mile drive back from the Oregon coast to Seattle that I would like to share with you and then discuss the potential implications for innovation success.

Now let me first say that I am not a trained human psychologist, but I am a student of human behavior, and I believe that if we watch and listen in other contexts, we can learn amazing things about human behavior that have profound implications for the innovation context. So without further delay, here’s the situation I encountered:

I was driving back along the Columbia River on the Oregon side on a road that was predominantly a two lane road (one lane of traffic in each direction) with passing lanes at various points, typically for the direction of traffic going uphill to give cars a chance to pass slower moving vehicles. Nothing too interesting in that description. Here is where things get interesting…

Now, why would every driver I encountered in front of me (without exception) speed up when the passing lane approached and slow down when it ended, even though the speed limit was unchanged? What’s the psychology behind this behavior?

Here are my observations:

What are the implications for innovation?

Competition in a free market economy is not fair, and the playing field is not level, and the road ahead is not an open highway but a two lane road with occasional passing lanes. The organizations that do the best job at identifying when the passing lanes are going to appear and the factors that are going to allow them to accelerate are the ones that will either leapfrog the existing leaders, or maintain their ongoing market leadership.

What kind of organization are you going to be?