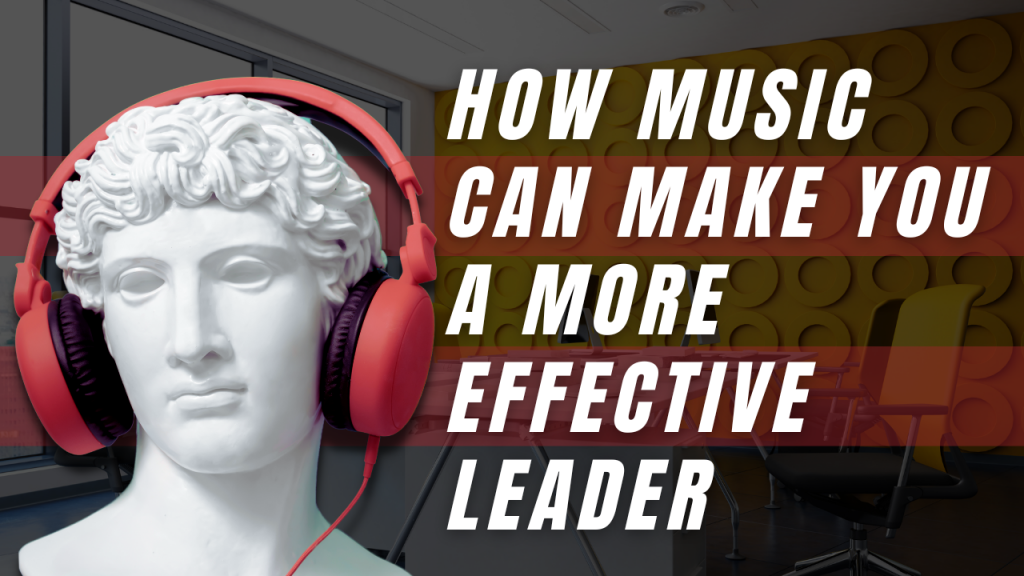 You don’t have to be a rock star with an album that makes millions to say, “Music changed my life.” You can be the leader of an organization, searching for a way to overcome an obstacle or challenge plaguing you—potentially for years.

The key to resolving an ongoing leadership challenge could lie in the music you’re listening to. Listening to the right music can actually shift the way you think, help you overcome obstacles and make you a better leader.

Suppose you’re feeling frustrated with your team, wondering why they’re not as motivated or engaged as you are, why they aren’t handling customers the way you would like, why you can’t fully delegate or something else. In that case, you’re probably asking, “How can I get them to change?”

But that may not be the right question. What if you asked instead, “What can I change in myself?” What if the thing you need to change is your internal environment, not your external one?

This is the tough question that The Leader’s Playlist, the book debut by Harvard lawyer turned CEO coach Susan Drumm, invites leaders to ask themselves.

I had the chance to interview Drumm for an episode of Amazing Business Radio. In the interview, she talked about game-changing ways leaders can become more effective. Specifically, she shared a powerful, practical tool for shifting unconscious perspectives and behaviors that may create a poor leadership outcome. That tool is music.

According to Drumm, music is a “brain hack for shifting ineffective leadership patterns.” From her decades of coaching top executives, including billionaire CEOs and high-profile political figures, Drumm knows that when someone is struggling as a leader, especially if they’re feeling strong emotions such as burnout, frustration, imposter syndrome, etc., it’s often because there’s an internal ‘playlist’ on repeat that is shaping how they view their circumstances—not outside pressures.

Drumm says, “This playlist of thoughts is keeping them stuck. It’s become that soft background music they may be unable to hear, but it’s there, hijacking their emotional state.”

The internal playlist is typically rooted in childhood “wounds.” Drumm highlights common “playlist titles” she encounters in the executives and leaders she coaches, including, but not limited to:

These subconscious messages are deeply embedded in the leader’s psyche, and it’s a challenge for most leaders to simply think or decide their way out of their playlist.

During my interview, I asked Drumm if playing music can dramatically change a mood. She quickly answered, “Yes,” so I shared a short story about a favorite song I listen to in the morning when I need a little boost to get me going. The song is Perfect Day by Hoku. It is the upbeat song that was played in the opening of ‘Legally Blonde’. The lyrics don’t match with my work ethic (Sun’s up/It’s a little after twelve/Make breakfast for myself/Leave the work for someone else), but the energy, lightheartedness and overall meaning make it a great song—at least for me.

Music can alter your mood, clear your head and change how you think over time. Drumm’s book outlines a strategy for using music to tap into your subconscious. Change the way you feel, and you shift your thought patterns. Her goal is to help leaders create a playlist that reflects the life they want to lead, understand how their current playlists came to be and learn how the power of music can unlock a leader’s true potential.

So, if you’re struggling to lead your team effectively, check for an internal playlist playing in the background, and then create a literal playlist to help rewire those beliefs. As Drumm says: your personal evolution sparks your leadership evolution!

1 thought on “Music Can Make You a More Effective Leader”