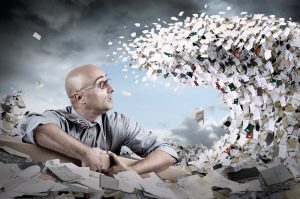 In #MyIndustry, content creation (I’m an author, keynote speaker and publisher), there is already a flood of content and the flood waters will not recede anytime soon. In fact, the rate of content creation is increasing as more companies launch content marketing and inbound marketing campaigns to pull customers to them.

Before the Internet came along, content was naturally limited by the potential throughput possible through a relatively fixed number of available channels:

Things remained relatively stable for several decades, then beginning in about 1980 this began to change. Cable and satellite television began to arrive taking television from a handful of stations to hundreds. The number of magazines began to grow, doubling between 1980-2000 according to Pew Research, online services and eventually the Internet emerged to provide a plethora of alternatives to traditional newspapers, and satellite and internet radio arrived. At the same time Amazon, Lulu and others launched the self-publishing revolution.

The amount of content available to people has exploded over the last 35 years. I saw a statistic recently that more than 1 TRILLION photos will be taken in 2015, compared to 2.7 Trillion photos cumulatively stored through the end of 2014.

With the rate of the content deluge increasing and with none of it draining out the bottom of the Internet bathtub, it will become harder and harder for a content creator like myself to capture people’s attention and to afford to continue to deliver quality insights from research, collaboration, and connection.

Being a content creator is a lot like being a space object, there are lots of asteroids in space, and it is easy to float around as an asteroid, but to carefully tend and cultivate an ecosystem that helps you attract enough mass and an atmosphere capable of generating and growing life is much harder.

Creating unique and differentiated insights to power content that educates, informs, or entertains (or potentially all three) is hard enough, but if you want to create something with its own source of gravity, you need to collect and harness many more skills, while also looking for potential collaborators with complimentary skills.

This will always be true for artists, musicians, authors, and any other kind of content creator. There is no going back?

So, what’s your center of gravity?

And how can you make it stronger?

In my own content creation sphere, I continue to work to strengthen the center of gravity in the innovation arena by working on a site redesign with my great Innovation Excellence co-Founders and the digital professionals at Juice Interactive, and growing a new center of gravity in the change arena with some new partners as we seek contributing authors for an upcoming launch of Charting-Change.com.

Helping to make innovation and change insights accessible for the greater good is what drives me, and I’ll keep doing it as long as I possibly can!