A Refreshing Approach to Product Innovation 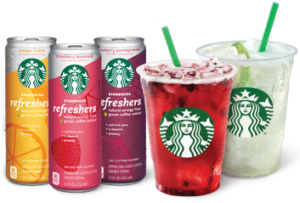 Sometimes it is better to be late than never. Starbucks recently announced a new line of energy drinks – Starbucks Refreshers. There are two flavors Cool Lime and Very Berry Hibiscus and instead of copying other energy drinks, and use the same active ingredients as the usual suspects, they instead decided to use something uniquely Starbucks – green coffee extract.

Starbucks has done something else smart, and that is that they have created a self-reinforcing product loop that allows for three different preparations and use cases for the same basic product, all in a single summer product launch:

In addition to being sold in their stores and licensed locations, the can and VIA preparation can be distributed via Starbucks’ existing grocery distribution channels.

Starbucks Refreshers are a great example of taking components of your brand and other organizational assets and leveraging them to create new products that people might not have thought about you creating, but that feel like natural extensions to them instead of a stretch.

Starbucks Refreshers are also a great example of looking at your raw materials in a new way and as a result a new product solution in born.

What might happen if you looked at your raw material inputs in a new way?

Braden Kelley is a Design Thinking, Innovation and Transformation consultant, a popular innovation speaker, workshop leader, and creator of The Change Planning Toolkit™. He is the author of Stoking Your Innovation Bonfire from John Wiley & Sons and Charting Change from Palgrave Macmillan. Braden has been advising companies since 1996, while living and working in England, Germany, and the United States. Braden is a US Navy veteran and earned his MBA from top-rated London Business School. Follow him on Twitter and Linkedin.
View all posts by Braden Kelley →
This entry was posted in Innovation. Bookmark the permalink.