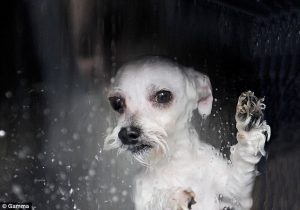 I saw the second picture in this article (of a dog washing machine in Japan) over my wife’s shoulder during a leisurely reading of the Sunday Seattle Times yesterday. I think it was in the Parade magazine, and as I started writing this article I found the same picture posted two years ago here, so it became clear that this idea – a dog and cat washing machine – has been already productized and in use for at least a year in Japan. But then I found the first picture in this article (which looks a lot like my daughter’s dog) in an article about the Dog-o-Matic that appeared in The Daily Mail back in 2009, meaning some inventive Brit appears to have beat out someone from Japan by nearly a year. 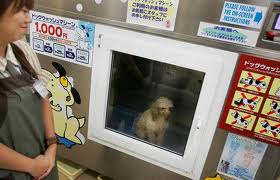 Now, I can say with reasonable certainty that very few dog or cat owners really enjoy giving Fido or Princess a bath, and so the idea of a machine that you lead Fido or Princess into and shut the door and push a button to accomplish the job, sounds very appealing. It can be an incredibly messy operation fraught with danger and frustration (thus the rise of self-service dog washing places), but when you look at the first picture, is the emotional trauma of the experience something that dog or cat owners (or dogs/cats for that matter) could endure over the long term?

Looking at these images, they remind me of an experience my wife and I (or mostly my wife) had in an automatically cleaned public restroom at a train station in Versailles, France that was just about as traumatic. But that’s a story for another day…

So, what do you think? Invention or innovation?

Is this something that will catch on with dog owners around the world?

I’ll leave you with a video of the Japanese version in use:

Braden Kelley is a Director of Design Thinking, Innovation and Transformation at Oracle, a popular innovation speaker, workshop leader, and creator of The Change Planning Toolkit™. He is the author of Stoking Your Innovation Bonfire from John Wiley & Sons and Charting Change from Palgrave Macmillan. Braden has been advising companies since 1996, while living and working in England, Germany, and the United States. Braden earned his MBA from top-rated London Business School. Follow him on Twitter and Linkedin.
View all posts by Braden Kelley →
This entry was posted in Innovation and tagged cats, cleaning, dogs, ideas, inventions, Japan, pets. Bookmark the permalink.