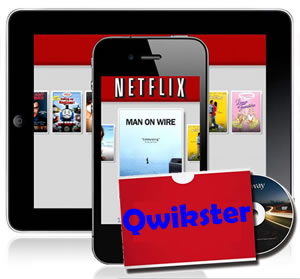 Breaking up is hard to do, but sometimes it is the right thing to do.

Imagine my surprise when an e-mail from Reed Hastings, Co-Founder and CEO of Netflix arrived in my inbox this morning announcing that Ms. Netflix was getting an innovation divorce.

Yes, Ms. Netflix has decided to send her old man packing and is no longer ashamed to tell you his name – Qwikster. Yes, Mr. Qwikster has been kicked to the curb with his DVD and Blu-Ray collection. Rumor has it Mr. Qwiskter was caught having a ‘qwikie’ with a mature video game, and Ms. Netflix decided she’d had enough. The newly independent Ms. Netflix announced she planned to devote all of her energy to her passion for streaming content now that Mr. Qwikster was out of the picture. Both hope that their individual pictures will be sharper after the breakup – and in full high-definition. They will share custody of their children Television and Movies, with Ms. Netflix getting custody online and Mr. Qwikster maintaining his relationship with the two by mail. Some friends of Ms. Netflix and Mr. Qwikster have already abandoned one or the other, with some people maintaining a relationship with both. In time we will find out who really has more friends.

I wish both Ms. Netflix and Mr. Qwikster the best of luck in their new lives apart from each other.

Continue reading the rest of this article on Innovation Excellence

Braden Kelley is a Director of Design Thinking, Innovation and Transformation at Oracle, a popular innovation speaker, workshop leader, and creator of The Change Planning Toolkit™. He is the author of Stoking Your Innovation Bonfire from John Wiley & Sons and Charting Change from Palgrave Macmillan. Braden has been advising companies since 1996, while living and working in England, Germany, and the United States. Braden earned his MBA from top-rated London Business School. Follow him on Twitter and Linkedin.
View all posts by Braden Kelley →
This entry was posted in Innovation, Strategy. Bookmark the permalink.