Forty-Three Percent Say 40-Plus Is Old 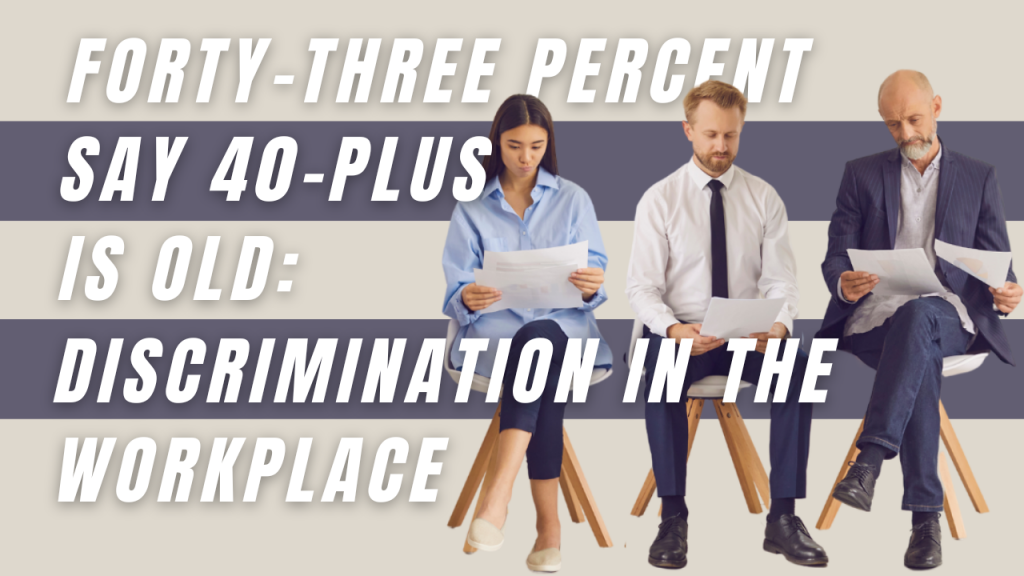 Diversity, equity and inclusion, known as DEI, is a popular yet sensitive topic in the workforce today. Leadership and HR that recognize this are finding ways to ensure employees from all races, ethnicities, abilities, sexual orientations, religions, etc., are represented. Sometimes included, but often left out, is age.

Age shows no color, race, religion, sex, etc. It just is. People get older, and as they do, workplace biases may become evident. It’s important to be aware of this issue. A 2022 study by LiveCareer, ‘Older People & the Workplace’, revealed some intriguing findings regarding age-related stereotypes and discrimination. More than 1,000 workers were surveyed to “investigate their opinions about older people in the workplace.”

Eight in ten respondents claimed age stereotypes were still alive in the workplace.

What is considered old? Forty-three percent of those surveyed said 40-plus is old. Twenty-six percent said 50-plus is old. And 21% said 60-plus is old. So, if you are 50, with probably 15 or more years until retirement, 69% of the people you work with think you are old.

Here are some more findings from LiveCareer’s study to get you thinking about how your organization treats aging employees:

If over 50 is old, then leadership is … old. According to Zippia, there are over 38,700 CEOs currently employed in the U.S., and their average age is 52 years old. If you look at the Fortune 500, the average age of a CEO is 57. Several companies on the Fortune list are run by CEOs ranging from 71 to 91!

Consider the age of the most powerful executives in the United States. President Biden was 78 when he became president. Donald Trump was 70. Barak Obama seems like a baby considering he entered the Oval Office when he was just 47. The overall average age of a United States president entering office is 56 (almost 57).

Some companies and brands are taking a proactive position against age discrimination. Dove and Wendy’s in Canada reacted to CTV news firing Canadian news anchor Lisa LaFlamme for letting her hair go gray. Dove Canada responded with a #KeepTheGrey campaign on its social media postings. They wrote, “Age is beautiful. Women should be able to do it on their own terms, without consequences.” Wendy’s tweeted, “Because a star is a star regardless of hair color.”

Companies are evaluating their retirement policies, recognizing the value of older employees. Target recently announced it is eliminating the mandatory retirement age of 65. Its current CEO, Brian Cornell, will be turning 64 on his next birthday, and Target doesn’t seem ready to start planning for his successor. While Target’s reason for changing the policy may seem self-serving, you can’t ignore that they have come to realize the value in keeping their best employees, regardless of age. Other major companies like 3M, Merck and Boeing are also changing their policies on mandatory retirement.

The OECD (Organization for Economic Co-operation and Development), an international group of economists based in Paris, with more than 38 member countries, predicts that by 2050, more than four in ten individuals (that’s 40%) in the world’s most advanced economies are likely to be older than 50. The workforce is aging even more rapidly as younger people are starting work at an older age, and older people are staying employed.

Despite these changes and observations, age bias still exists. It needs to be considered—and eradicated—the same as other DEI issues.