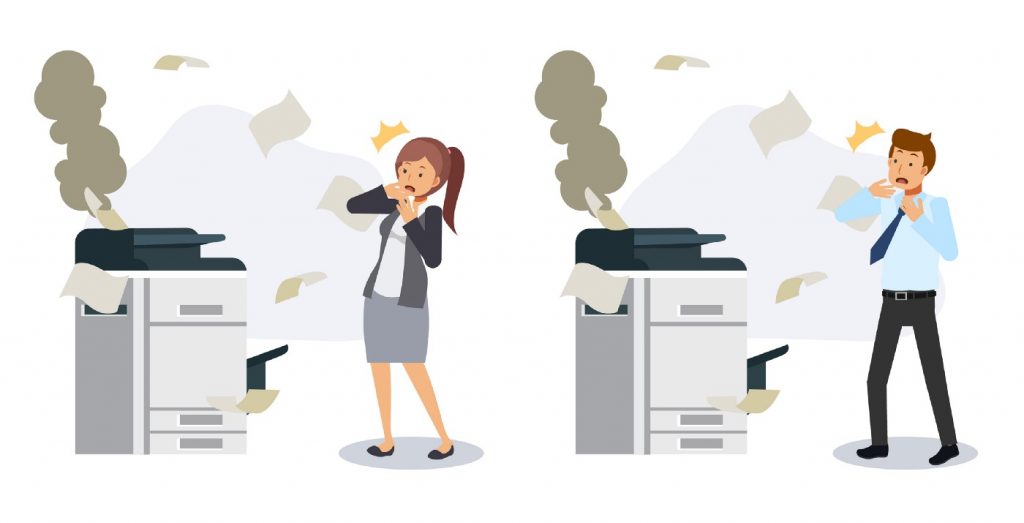 Have you ever felt the urge to kick the photocopier? Or worse? That time when you desperately needed to make sixty copies of a workshop handout five minutes before your session begins. Or when you needed a single copy of your passport or driving license, it’s the only way you can prove your identity to the man behind the desk about not to approve your visa application? Remember the awful day when you were struggling to print your boarding passes for the long-overdue holiday; that incident meant you ended up paying way over the odds at the airport?

The copiers may change, the locations and contexts may differ but underneath is one clear unifying thread. The machines are out to get you. Perhaps it’s just a random failure and you are just the unlucky one who keeps getting caught. Or maybe it’s more serious, they’ve started issuing them with an urgency sensor which detects how critical your making a copy is and then adjusts the machine’s behavior to match this by refusing to perform.

Whatever the trigger you can be sure that it won’t be a simple easy to fix error like ‘out of paper’ which you just might be able to do something about. No, the kind of roadblock these fiendish devices are likely to hurl on to your path will be couched in arcane language displayed on the interface as ‘Error code 3b76 — please consult technician’.

Given the number of photocopiers in the world and the fact that we are still far from being a paperless society in spite of our digital aspirations, it’s a little surprising that the law books don’t actually contain a section on xeroxicide — the attempt or execution of terminal damage to the lives of these machines.

Help is at hand. Because whilst we may still have the odd close and not very enjoyable encounter with these devices the reality is that they are getting better all the time. Not only through adding a bewildering range of functionality so that you can do almost anything with them apart from cook your breakfast, but also because they are becoming more reliable. And that is, in large measure, down to something called a community of practice. One of the most valuable resources we have in the innovation management toolkit.

The term was originally coined by Etienne Wenger and colleagues who used it to describe “groups of people who share a concern or a passion for something they do and learn how to do it better as they interact regularly.” Which is where the idea of communities of practice comes in. It’s a simple enough idea, based on the principle that we learn some things better when we act together.

Shared learning helps, not least in those situations where knowledge is not necessarily explicit and easily available for the finding. It’s a little like mining for precious metals; the really valuable stuff is often invisible inside clumps of otherwise useless rock. Tiny flecks on the surface might give us the clue to something valuable being contained therein but it’s going to take quite a lot of processing to extract it in shiny pure form.

Knowledge is the same; it’s often not available in easy reach or plain sight. Instead it’s what Michael Polanyi called tacit as opposed to explicit. We sometimes can’t even speak about it, we just know it because we do it.

Which brings us back to our photocopiers. And to the work of Julian Orr who worked in the 1990s as a field service engineer in a large corporation specializing in office equipment. He was an ethnographer, interested in understanding how communities of people interact, rather as an anthropologist might study lost tribes in the Amazon. Only his research was in California, down the road from Silicon Valley and he was carrying out research on how work was organized.

He worked with the customer service teams, the roving field service engineers who criss-cross the country trying to fix the broken machine which you’ve just encountered with its ‘Error code 3b76 — please consult technician’ message. Assuming you haven’t already disassembled the machine forcibly they are the ones who patiently diagnose and repair it so that it once again behaves in sweetly obedient and obliging fashion.

They do this through deploying their knowledge, some of which is contained in their manuals (or these days on the tablets they carry around). But that’s only the explicit knowledge, the accumulation of what’s known, the FAQs which represent the troubleshooting solutions the designers developed when creating the machines. Behind this is a much less well-defined set of knowledge which comes from encountering new problems in the field and working out solutions to them — innovating. Over time this tacit knowledge becomes explicit and shared and eventually finds its way into an updated service manual or taught on the new version of the training course.

Orr noticed that in the informal interactions of the team, the coming together and sharing of their experiences, a great deal of knowledge was being exchanged. And importantly that these conversations often led to new problems and solutions being shared and solved. These were not formal meetings and would often happen in temporary locations, like a Monday morning meet-up for breakfast before the teams went their separate ways on their service calls.

You can imagine the conversations taking place across the coffee and doughnuts, ranging from catching up on the weekend experience, discussing the sports results, recounting stories about recalcitrant offspring and so on. But woven through would also be a series of exchanges about their work — complaining about a particular problem that had led to one of them getting toner splashed all over their overalls, describing proudly a work-around they had come up with, sharing hacks and improvised solutions.

There’d be a healthy skepticism about the company’s official repair manual and a pride in keeping the machines working in spite of their design. More important the knowledge each of them encountered through these interactions would be elaborated and amplified, shared across the community. And much of it would eventually find its way back to the designers and the engineers responsible for the official manual.

Orr’s work influenced many people including John Seely Brown (who went on to be Chief Scientist at Xerox) and Paul Duguid who explored further this social dimension to knowledge creation and capture. Alongside formal research and development tools the storytelling across communities of practice like these becomes a key input to innovation, particularly the long-haul incremental improvements which lie at the heart of effective performance. 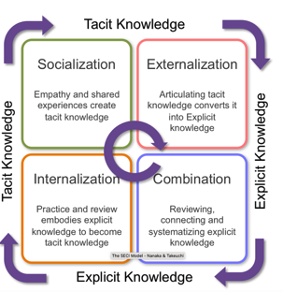 An important theme which Japanese researchers Ikujiro Nonaka and Hirotaka Takeuchi were aware of and formalised in their seminal book about ‘the knowledge creating company’. They offered a simple model through which tacit knowledge is made explicit, shared and eventually embedded into practice, a process which helped explain the major advantages offered by engaging a workforce in high involvement innovation. Systems which became the ‘lean thinking’ model which is in widespread use today have their roots in this process, with teams of workers acting as communities of practice.

Their model has four key stages in a recurring cycle:

CoPs are of enormous value in innovation, something which has been recognized for a long time. Think back to the medieval Guilds; their system was based on sharing practice and building a community around that knowledge exchange process. CoPs are essentially ‘learning networks’. They may take the form of an informal social group meeting up where learning is a by-product of their being together; that’s the model which best describes our photocopier engineers and many other social groups at work. Members of such groups don’t all have to be from the same company; much of the power of industrial clusters lies in the way they achieve not only collective efficiency but also the way they share and accumulate knowledge.

Small firms co-operate to create capabilities far beyond the sum of their parts — and communities of practice form an excellent alternative to having formal R&D labs. John Seely Brown’s later research looked at, for example, the motorcycle cluster around the city of Chongquing in China whose products now dominate the world market. Success here is in no small measure due to the knowledge sharing which takes place within a geographically close community of practice.

CoPs can also be formally ‘engineered’ created for the primary purpose of sharing knowledge and improving practice. This can be done in a variety of ways — for example by organizing sector level opportunities and programs to share experience and move up an innovation trajectory. This model was used very successfully in, for example, the North Sea oil industry first to enable cost-reduction and efficiency improvements over a ten-year period in the CRINE (Cost reduction for a new era) program. It resulted in cumulative savings of over 30% on new project costs and as a result a similar model was deployed to explore new opportunities to deploy the sector’s services elsewhere in the world as the original North Sea work ran down.

It can work inside a supply network where the overall performance on key criteria like cost, quality and delivery time depends on fast diffusion of innovation amongst all its members. One of Toyota’s key success factors has been in the way in which it mobilizes learning networks across its supplier base and the model has been widely applied in other sectors, using communities of practice as a core tool.

CoPs have been used to help small firms share and learn around some of the challenges in growth through innovation — for example in the highly successful Profitnet program in the UK. It’s a model which underpins the start-up support culture where expert mentoring can be complemented by teams sharing experiences and trying to help each other in their learning journeys towards successful launch. And it’s being used extensively in the not-for-profit sector where working at the frontier of innovation to deal with some of the world’s biggest humanitarian and development challenges can be strengthened by sharing insights and experiences through formal communities of practice.

At heart the idea of a community of practice is simple though it deals with a complex problem. Innovation is all about knowledge creation and deployment and we’ve learned that this is primarily a social process. So, working with the grain of human interaction, bringing people together to share experiences and build up knowledge collectively, seems an eminently helpful approach.

Which suggests that next time you are thinking of taking a chainsaw to the photocopier you might like to pause — and maybe channel your energies into thinking of ways to innovate out of the situation. A useful first step might be to find others with similar frustrations and mobilize your own community of practice.

You can find a podcast version of this here

If you’d like more songs, stories and other resources on the innovation theme, check out my website here