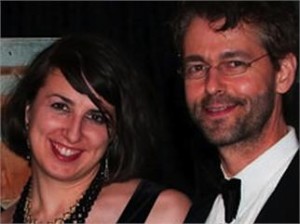 Many of you out there are entrepreneurs, running small businesses (or big ones), struggling to make your business successful. But when did you first know that you were destined to be an entrepreneur? And what challenges or ridicule have you endured as the result of your decision to quit a stable job or perhaps to never take one?

What possessed you to instead pursue either an independent lifestyle business or to attempt to build something that scales and becomes the hopefully stable employment for others?

I had the opportunity to sit down with Lara Feltin, one half of the husband-and-wife team that started a small business networking community in Seattle six years ago and now boasts more than 65,000 members around the country. Their community started with the tagline ‘Business networking that doesn’t suck’ but they have since switched the tagline that goes with their Biznik site to ‘Going it alone, together.’

Biznik, while sometimes compared to LinkedIn or Facebook, is not about marketing but about building relationships—specifically connecting solopreneurs and small business people with each other, hopefully creating long-term mutually beneficial connections. The site started as an attempt for professional photographer Lara Feltin and Web developer Dan McCombs to connect and share with their fellow entrepreneurs. But it has evolved into a service that tens of thousands of other entrepreneurs now use to connect with each other online and offline.

That mix of online and offline connections has served as a strong growth engine in places like Seattle, where Biznik counts 15,000 people as members. And if money were no object, the couple would probably invest more resources in helping to foster a stronger online/offline connection between community members. But, living within constraints has helped the site be self-supporting, live within a budget and prioritize future development effectively.

Continue reading the rest of this article on the American Express OPEN Forum.

Braden Kelley is a Director of Design Thinking, Innovation and Transformation at Oracle, a popular innovation speaker, workshop leader, and creator of The Change Planning Toolkit™. He is the author of Stoking Your Innovation Bonfire from John Wiley & Sons and Charting Change from Palgrave Macmillan. Braden has been advising companies since 1996, while living and working in England, Germany, and the United States. Braden earned his MBA from top-rated London Business School. Follow him on Twitter and Linkedin.
View all posts by Braden Kelley →
This entry was posted in American Express OPEN Forum, Entrepreneurship. Bookmark the permalink.