How to Successfully Lead a Reorganization

An Exclusive Interview with Stephen Heidari-Robinson and Suzanne Heywood 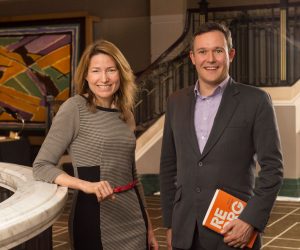 I had the opportunity recently to interview fellow authors Stephen Heidari-Robinson and Suzanne Heywood, former leaders in McKinsey’s Organization Practice, about ReOrg: How to Get It Right, a practical guide for successfully planning and implementing a reorg in five steps—demystifying and accelerating the process at the same time. Based on their twenty-five years of combined experience managing reorgs and on McKinsey research with over 2,500 executives involved in them, the authors distill what they and their McKinsey colleagues have been practicing as an “art” into a “science” that executives can replicate—in companies or business units large or small.

1. What are the most popular reasons for doing a reorganization?

Our company Quartz has undertaken a survey with Harvard Business Review to understand the nature of reorganisations which we also discuss in our book, ReOrg: How to Get It Right. We looked at why they happen, how they happen and what drives success versus failure, and have 2500 results so far. We can tell you that statistically, the most popular reason for launching a reorganisation of just under a quarter of cases is responding to a change in customer needs or a change in the business environment. Joint second is to enable company growth and to cut costs with slightly under 20% of both.

The fourth most popular one is to respond to a leader’s desire to reshape the organisation in their own image, and we can also tell you that that last reason is statistically the least successful reason for reorganising. It’s very clear that you need to have a business rationale to change your organisation, not just do it because of one leader’s whim.

2. What is the biggest misconception that people have about successful reorganization efforts?

We think the biggest misconception is that deciding on the concept of the organisation and how it’s going to affect senior leaders in the company is the hardest thing to do.

Actually intuitively that’s pretty easy. You can have support from consultants to do it but you know there are a finite number of ways in which you might organise. You could think of them for yourself. You could have a debate with your senior leaders about what you want to do and what you don’t want to do. If someone doesn’t want to join that bus they can leave the bus and the rest can continue. So intuitively that’s kind of obvious.

Actually the hardest thing to deliver in a reorganisation is all the plumbing and the wiring that follows that. You don’t change the performance of people by just changing someone’s boss’s boss’s boss’s boss. It’s actually in detailing out the processes, the interfaces, the governance, the capabilities required, the behaviours that you need and how management information is going to be reported. All those areas that are actually much, much, much more difficult and receive far less attention than the high-level cartoon that gets announced as soon as you know what it means for your senior leaders.

3. What are some of the typical mistakes people make with reorganizations?

We think one mistake goes alongside the biggest misconception which is not having an end to end plan of how to deliver the reorganisation from soup to nuts, so from thinking about what business objective you want to achieve to running the organisation in a different way. People seem to do it in a ‘one thing follows the other’ type way and that means that the whole process lasts a long time, on average about 12 months. Our statistics are very clear- if you deliver your reorganisation in six months or less you’re far more likely to be successful because you disrupt the organisation for less long and you get the results that you wanted quicker. In order to deliver that you need to have a good plan. Whether you have a good plan or you don’t is one of the biggest causes of whether or not you’re successful. Only one third of reorganisations have a good plan.

The second typical mistake is to focus almost entirely on lines and boxes of the org charts and perhaps even also roles and number of people, so thinking about what the organisation looks like, rather than how it works, which is a lot about governance, processes, skills, behaviours, the way in which teams can function together. About 90% of organisations cover structure and roles. 50% or less look at these other areas of processes, governance and people. 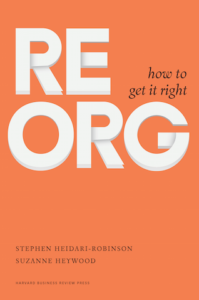 4. Why are reorganizations so difficult to do well?

Here is a very simple answer: because they involve people.

No one likes change, or very few people like change and they like disruption even less. They don’t like getting involved in a process where they think they’re going to need to fear for their jobs (and they always assume that they do, regardless of whether or not this is for growth or cost savings.) Usually it is the case that some people will leave the organisation as a consequence of this, even if they don’t have the right skills for growth. There are processes that lead to a lot of fear. We do think leaders often tend to outsource the problem to either consultants or an internal team, rather than gripping it themselves. In fact, what could be a more important role of leaders in an organisation than deciding how they want to deploy their people in order to get the business outcomes they want. Really we think it’s a failure to grapple with the people aspects of the organisation that make them so difficult.

Continue reading the article on CustomerThink.com

Braden Kelley is a Design Thinking, Innovation and Transformation consultant, a popular innovation speaker, workshop leader, and creator of The Change Planning Toolkit™. He is the author of Stoking Your Innovation Bonfire from John Wiley & Sons and Charting Change from Palgrave Macmillan. Braden has been advising companies since 1996, while living and working in England, Germany, and the United States. Braden is a US Navy veteran and earned his MBA from top-rated London Business School. Follow him on Twitter and Linkedin.
View all posts by Braden Kelley →
This entry was posted in Change, Leadership, Management and tagged Interviews, Reorg, Reorganizations, Reorganize. Bookmark the permalink.