Is Innovation a Priority for CEOs? 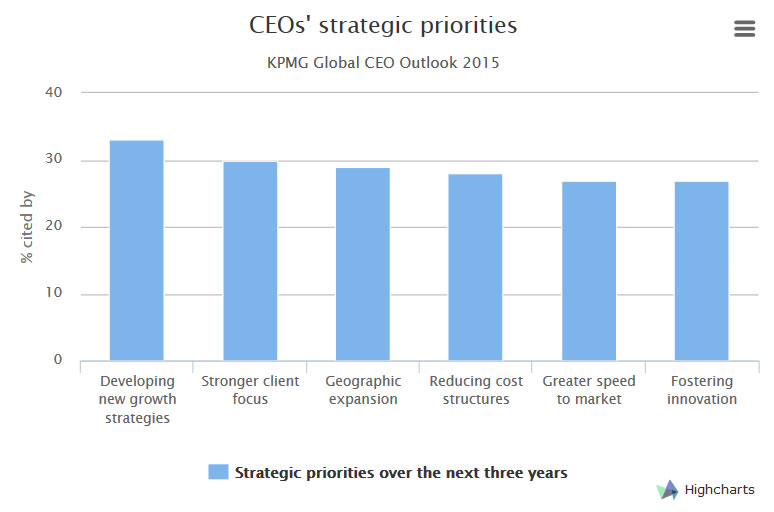 We’d all like to be the best at everything and to make everything a priority, but that’s just not the real world.

So what did CEOs say was their priority when they were surveyed by KPMG for their Global CEO Outlook 2015.

Here are nine of the key findings from the report:

It is also interesting that American CEOs are more pessimistic about growth prospects than their international brethren:

Especially given that survey respondents see the greatest potential for growth in the United States: 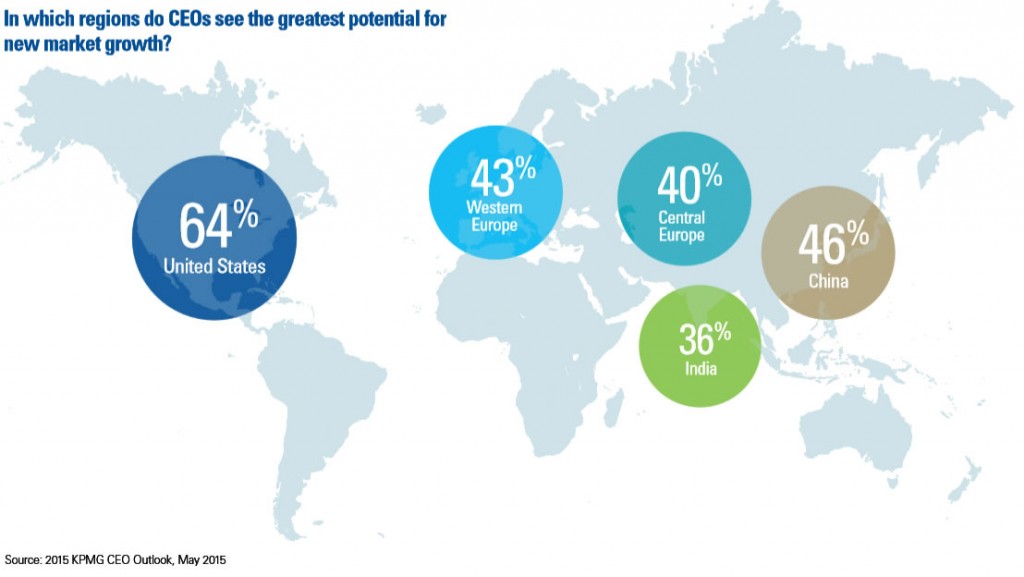 And while American, German, and Japanese CEOs definitely live in the most mature markets, part of their growth pessimism may come from more completely grasping the impact of the top four concerns of CEOs voiced in the survey: 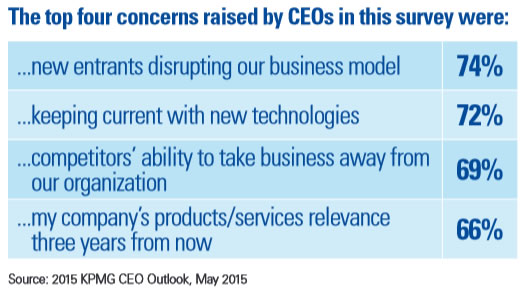 “Maintaining status quo, while incredibly comfortable, is the most risky thing you can do in today’s world.” – Mark A. Goodburn, Global Head of Advisory, KPMG

But it shouldn’t be surprising that this option scored the lowest, because my experience has been that leaders want innovation but they often aren’t willing to invest the dollars required when the rubber hits the road, and even more troublesome is that many leaders don’t understand how to foster innovation. Most CEOs see innovation as a project and not as an organizational capability they need to develop in order to help fend off disruption. Anyways, here are the top three barriers to innovation CEOs identified in the survey:

Maybe there is no money for innovation and companies are so worried about disruption is because the survey tagged the CFO as the executive gaining the most clout in the C-suite and the CIO came in last. Just a thought.

So what’s holding you back from making sustained innovation a priority?

Braden Kelley is a Director of Design Thinking, Innovation and Transformation at Oracle, a popular innovation speaker, workshop leader, and creator of The Change Planning Toolkit™. He is the author of Stoking Your Innovation Bonfire from John Wiley & Sons and Charting Change from Palgrave Macmillan. Braden has been advising companies since 1996, while living and working in England, Germany, and the United States. Braden earned his MBA from top-rated London Business School. Follow him on Twitter and Linkedin.
View all posts by Braden Kelley →
This entry was posted in Innovation, Leadership, Management, Strategy and tagged Global CEO Outlook 2015, KPMG, Surveys. Bookmark the permalink.